The film follows Murrow’s early days in radio in which he became the voice who the country would get firsthand accounts of the war in Europe from. It then moves into the birth of television with Murrow wanting to use the medium as an educational tool and inform the public of unfair and dangerous activities no matter how controversial the topics were.

CBS would be reluctant to have the face of CBS news engage in such controversial topics, such as his famous reports on Senator Joseph McCarthy’s red hunt. Murrow’s battle with McCarthy threatens to cause CBS a great deal of problems, but Murrow would be persistent that the news and television had a responsibility to inform and report to the public, no matter what the risks were.

It’s hard not to watch Murrow without being reminded of the similar Murrow 2005 docudrama Good Night, Good Luck, which detailed the Murrow/McCarthy battle on his See It Now program. That film’s focus was on that segment in Murrow’s history. HBO’s TV-movie Murrow however, uses that as just one highlight of Murrow’s journalism career. Murrow might be a much more traditional bio-pic, covering more years, time and incidents than what most bio-pics do today.

A lot of times it seems a bio film about a real life person is no longer an all-encompassing story, but a slice of life where the film zooms in and recounts one portion of the subjects life. Perhaps filmmakers feel there is just too many stories to adequately cover through decades of a persons life and give it all enough justice. It would be preferable to focus on one major thing in their lives and make that the window into the person.

Murrow doesn’t take that approach. The film covers about  twenty years of Murrow’s life in broadcasting. And yes, while some of the stories within that timeframe don’t get as much attention as they could have and would have been dramatic stories all on their own (such as his McCarthy reports), I still found Murrow an engaging portrait of this man, who he was, what he did, the evolving broadcast period in which he existed and the legacy he would leave.

Travanti does an admirable job as Murrow. He has a quiet commanding presence throughout the movie. The recreation of the Murrow broadcasts carries less weight than they could have. Travanti doesn’t have the gravitas in his voice as Murrow had, but the scenes still get the point across. It’s when he’s away from the camera dealing with CBS Chairman William Paley (Dabney Coleman) and CBS President Frank Stanton (John McMartin) trying to maintain the integrity of the news department in the face of growing concerns where the movie excels.

Murrow, along with See It Now’s producer Fred Friendly (Edward Herrmann) are adamant to do hard-hitting stories, while the higher ups would rather Murrow do his fluffy Person To Person interviews. It’s a trade off Murrow accepts that allows him the freedom to do the important news he cares about. Gradually, this struggle begins to mount. With increasing pressure from the business end, the fear of unhappy sponsors and advertisers and the increasing ratings of more frivolous programming, notably quiz shows, Murrow is released from CBS.

The film does a great job of portraying television as a brand new medium and the growing power it had. The business aspects of it begins to eclipse the virtues that Paley is behind towards the beginning. And Coleman is terrific in this. He’s a man with two sides – one side contains Murrow’s desire and admiration for solid news reporting, but he’s also keenly aware of the business side of television. Colman is as much a star in this as Travanti. Watching this it reminded me how much I miss seeing Coleman in movies. There’s one short scene that really stood out to me. The night of the Pearl Harbor attack Murrow has dinner with President Roosevelt played by Robert Vaughn. Roosevelt describes the details of the attack to Murrow. Murrow then struggles with the dilemma of whether to report what he learned. I had always found this story fascinating and to see it dramatized was a compelling moment.

The film does suffer from being a very static-talking in offices-and on phones-type of TV-movie. It’s not a very cinematic experience, but with some wonderfully written scenes and such terrific performances by the cast that didn’t bother me in the least. They could have commanded my attention standing in empty rooms.

This Murrow TV-movie seems to have disappeared. It’s strange too since Murrow got pretty good reviews and won several cable awards when it premiered. I don’t believe it’s available on dvd (although it is posted on youtube). It seems to have been forgotten.

At the time the film stirred up its own controversy when CBS and several of the individuals portrayed in the film, who were very much alive at the time this came out, attacked the accuracy of the film. I wouldn’t doubt there are some liberties and artistic license taken with characters and scenes – ones much more familiar with Murrow and the history of CBS news would know better than me – but I still felt the movie had some excellent performances and did a very commendable job at showing the importance Murrow was to broadcast journalism and the standards he set for others to follow. 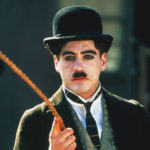