No accents. No period garb. The likelihood of any Oscar attention was unlikely. It was meant to be a straight forward audience pleaser. The actress who is known as “as the best actress of her generation” was going to court action fans on river rafting set thriller and be forced to outwit some killers.

The River Wild could easily have been a cheap B-movie. It’s a white water rafting variation of the 1953 thriller The Hitch-Hiker, where two unsuspecting men find themselves hostages to a very dangerous man. That’s a great movie by the way.

Of course, that’s just one example of this type of premise, that has been done countless times before in films. It might not be that unique, but it can reliably be entertaining. It’s all about the execution.

Streep is a former river rafting guide who goes on a family vacation. They’re there to celebrate her son’s birthday, appreciate the beauty of the Montana river that she used to be a rafting guide and repair some family damage with husband David Straithairn who reluctantly shows up a the last minute. Sounds like a scenic fun time could be had that could also potentially mend the growing the distance between wife and husband.  That is until this vacation trip gets some uninvited guests who force this river rafting guide to help them down river.

Fugitives Kevin Bacon and his shifty sidekick John C. Reilly are on the run and force Streep to guide them to safety down the river or they have no problem harming her family.

Now what choice does she have? She has to protect her family, but somehow outwit these uninvited guests before she’s forced to navigate the looming treacherous rapids known as ‘The Gauntlet’ where survival is slim.

This was quite a departure for Streep. Famously known for her Oscar caliber, accent soaked performances, she ventured into her most conventional action-oriented role. This wasn’t going to sweep at the Oscars or be showered with awards. This was a movie designed to dazzle audiences. The River Wild ended up quite the success with that. Curtis Hanson directs and keeps up the tension throughout. He certainly came a long way since directing the 1983 teen sex comedy Losin’ It with a young Tom Cruise, Jackie Earle Haley and Shelly Long. Although, he still had a few years before hitting his peak with L.A. Confidential.

He was just coming off the hit The Hand That Rocks The Cradle and delivered another thriller that brought in audiences. Add in a thrilling score by Jerry Goldsmith and The River Wild might not be as special as it could’ve been, but it is well made and ends up as enjoyable enough time.

Two of the lynchpins in The River Wild are Streep and Bacon, who work well off each other. Streep is likable, capable and believable as a rafting guide. She’s the protective mother, worried wife, nature lover and expert rafter. With most of her roles Streep convincingly plays the part.

When Bacon comes aboard the suspense start. Her trying to stare him down, reason with him and trying to figure out a way to get out of this situation alive will keep you watching. Around this time Bacon was shaking his young Footloose persona and digging into meatier character actor parts. He was smart to go that route. He balances having a likable demeanor at first to something a bit off to him. And when he does get to go full bad he doesn’t hold back and relishes every moment. It’s always fun when we get a bad guy who really enjoys being a bad guy.

He welcomes the boos, especially when he attempts to shoot the family dog! Listen, if you’re a movie villain and really want to be unliked by audiences try to hurt a lovable dog.

This is not challenging or unique stuff. It’s a traditional thriller. It is formulaic and predictable at times. There really aren’t any major twists or surprises that will knock your socks off along the way, but everyone does their part and serves the demands for this type of movie. At certain points things get pushed into absurd territory. The most implausible elements consist of Straitharin who somehow ‘outruns’ the ever moving raft downriver.

I don’t know how this is possible and he can manage to even keep up to them, let alone get ahead of them and has time to plan a rescue attempt. It’s a head scratching turn of events.

Then we have the the rafting sequences and the dangers of ‘The Gauntlet’, which this rafting party does eventually get to and becomes the added highlights to the film. They’re well put together exciting sequences.

Clearly they knew if they were making a movie about a river rafting guide forced to enter danger rapids it would have to play a vital part in the movie and expectations would be high for those scenes. They do a good job with them. All the locations look pretty spectacular and are photographed beautifully. I wonder if the areas they filmed at got a boost of tourists wanting to experience it for themselves.

The River Wild might not have broken any of the thriller action molds, but it does all work. Streep in an action role, Bacon chewing the scenery as a villain, good performances all around and all those beautiful locales their paddling through and nail-biting moments hitting the rapids. It might not leave a lasting impression on you and become a movie you revisit frequently, but it makes for an enjoyable, satisfying trip.

A very effective exciting trailer. It really sells the white water rafting adventure that lies ahead.

The river is essentially billed alongside Streep and Bacon. 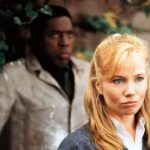