Well, it only lasted a short time. Some nameless company who recruited Matthew Broderick to step back into the shoes of 80’s cinematic teen icon Ferris Bueller had everyone talking. A short ten second teaser of a new Super Bowl commercial really created some buzz and excitement, including for yours truly.

Finally getting to see the full commercial got me motivated to be sure to tune into the game just to see it. At least I knew they would have at least one commercial this year that would have my interest.

Well, they blew all that anticipation by releasing the commercial online already! I have no idea why. Maybe the company – Honda, just couldn’t keep it in their pants and wait just a few days more, show it during the game and have it be topic of the so-called ‘water cooler talk’ Monday morning. Perhaps they thought by posting it online only a section of their target audience would see it and there would still be plenty of people who it will be a surprise to.

I just think they blew it.

The commercial itself…..well, the build up and tease was much better than the actual ad itself. I wasn’t expecting a great comedy goldmine, but for me it was still a letdown. Seeing Ferris…well Broderick, reenact classic scenes from the film in his adult years was just sort of ‘cute’ and there really wasn’t enough of a spin on any of them that I found them to be really entertaining.

Fans of Ferris will enjoy some of the quick references from the film (they’re really background details), but overall I thought the ad was somewhat overwhelming. The idea was great, the final execution…..eh.

But it’s just a commercial afterall. It is kind of funny the response the Ferris teaser generated. Some fans were seriously thinking it was an actual sequel to the film and are still hoping for one.

Now that the commercial has been seen, some of the responses range from “it’s great to see Ferris back” to “Ferris traded in that awesome red corvette convertible for a Honda CR-V???? Wow he really grew up uncool! Somebody please save Ferris!!!!”

As for the hopes of seeing a NEW decent commercial during the game….I did hear they might have some kind of Avengers teaser….so that could be something…. 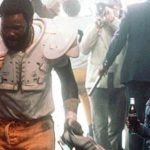