As most people know today marks the 50th anniversary of the assassination of President John F. Kennedy. The date November 22, 1963 is one of the most memorable dates in the country’s history and the death of the president is one of the most tragic events Americans faced in the 20th century. (I still think WWII easily beats it though). The assassination has undoubtedly become one of – probably the most – investigated murder cases in world history.

As with most historic anniversaries there are events, articles, gatherings, television specials all pausing to remember that day. There’s no shortage of coverage of the assassination anniversary.

I’ve always been fascinated with it. First, because it was such a historic event. It impacted everyone who lived during that time. I find it endlessly interesting hearing the stories of average Americans who were alive at the time recount the famous shared experience of ‘where were you’ when they learned President Kennedy had been killed.

Just yesterday I was speaking with an older co-worker asking her about it. She described being in high school when an announcement came over the PA informing the entire school what had happened. Hearing those individual personal moments has always been a captivating experience for me. This also includes those who were involved more directly from the instant the president was murdered. From the secret service agents, to the police, to hospital personnel, reporters, to the shocked former first lady. This was the worst thing that could possibly have happened that day and now everyone suddenly found themselves having to deal with making impulsive decisions after this shocking incident.

The news coverage of this event by itself is a gripping account of how newsmen at the time fought to learn new information, try to continuously update the public and found themselves thrust into the era of live television reporting.

There was a recent PBS documentary titled One PM Central Standard Time that details how CBS Television learned of the news and the hurdles and decisions they dealt with leading up to Walter Cronkite famously informing the country the president was dead on live television.

Then of course there’s the tangled web of suspicion and misinformation this murder has had through the years. Everyone knows that most people don’t believe that Lee Harvey Oswald acted alone in assassinating the president. Conspiracy theories have now taken on a life of their own with people speculating that a wide range of suspects were the ones really behind killing President Kennedy .

I think the real moment that gave birth to the conspiracy movement was the killing of Oswald by Jack Ruby (another shocking live television event coming only two later after the murder of the president). On the surface one could easily conclude that Oswald was intentionally silenced. How could Ruby even have gotten anywhere near Oswald in that police basement, let alone kill him on national television? That seems like an impossible feat. Something must be amidst here.

Unbelievably it was another random coincidence of timing and opportunity.

The world would never get to hear anything from Oswald other than his declarations of “I’m just a patsy”. I used to believe there must of been a conspiracy in the assassination. However, I let that go years ago and am now convinced Oswald was the only person involved with killing the president in Dallas. It was all just dumb luck Kennedy was driving past the building Oswald worked.

Oswald was an unhinged individual who used this random opportunity to kill the president with a cheap rifle he ordered through the mail. It was just that eerily simple.

Another aspect I find amazing about all this is the existence of the Zapruder film. How Abraham Zapruder kept filming keeping the motorcade in his frame while the sound of rifle shots are being fired I’ll never know. I see Youtube videos filmed in a more amateurish way than this.

One would think having an actual film of a murder being committed would alleviate any doubt as to what had happened, but it has done the opposite.

Think about it, you have a murder in the middle of the day in a major city, with hundreds of witnesses around, including many police officers and the murder is actually filmed – and that film has actually helped fuel the conspiracy theories. It’s pretty mind-boggling.

I actually always thought it was a bit disturbing that probably more people have watched the Zapruder film witnessing President Kennedy’s death, than watching one of the many speeches he had given in his life. And he had given some very famous ones. It’s pretty odd when I think about it.

There’s another disturbing thing I’ve seen in relation to Kennedy assassination or at least seen pictures and videos of it. Dealey Plaza in Dallas is preserved in pretty much the same state as it was the day Kennedy was killed. The sixth floor of the Texas School Book Depository is now a museum. If I ever got down to Texas I would be very curious to check it all out.

The spot where Kennedy was killed on Elm Street. The spot where Oswald’s third bullet struck him while he was riding in his motorcade and ended his life is marked with an ‘X’ on the road. Now I understand people going to Dealey Plaza and taking pictures of the Depository, the street, the Grassy Knoll. I would probably do the same thing.

Maybe this is just me, but what I find really tasteless are these people running out to this ‘X’ in the middle of traffic (Elm Street is a working road) smiling and doing embarrassing poses standing on or pointing to the ‘X’. This really seems inappropriate. It might of been fifty years ago, but a person died there.

I don’t know how these tourists think this is respectful behavior. I understand they want to show all their friends where they are on Facebook – “Look at us we’re at the place Kennedy was killed! – but have a little bit of class. I wonder if this bothers any of the local residents. I can’t imagine the poses these tourists would come up with if they visit Anne Frank’s attic.

I’ve gotten to watch a few of the documentaries/specials that have been airing in commemoration of the anniversary. The Kennedy Detail about the secret service agents assigned to protect the president was an interesting look at how they reacted and what transpired with them not only after the assassination, but their time spent guarding President Kennedy throughout his administration.

National Geographic’s JFK: The Final Hours takes a look at the admiration Kennedy had by the people who encountered him in his first day in Texas before the assassination. Interviews and archival footage document individuals who got to meet or see him never suspecting they would be mourning his death the following day. The doc is narrated by Bill Paxton who himself was as an eight-year-old Fort Worth resident in 1963 and got to see Kennedy give one of his final speeches. More conspiratorial-targeted is JFK: The Smoking Gun on Reelz. This is basically a doc arguing that Oswald didn’t fire the fatal shot that killed the president, but it was a clumsy Secret Service agent who did. Somehow upon hearing the first shots he scrambled to get his rifle out and in the confusion he accidently fired off a round and hit the president in the head. It’s a pretty far-out-there theory and I didn’t buy any of it for a minute.

On the opposite end was PBS’ NOVA: Cold Case JFK where present-day investigators and ballistic experts explain how the shooting went down and that the ‘magic bullet’ was not magical at all, but behaved in the exact way it was designed to. It was pretty good.

There are plenty of other docs and specials out there that I still plan on catching up on when I get the time. I want to stop in on CBS’ streaming 1963 original on-air television coverage of the assassination and presidential funeral. It’s streaming in real time as it all happened fifty years ago for the next four days. One thing I would really like to check out is Vincent Bugliosi’s mammoth book on the assassination – Reclaiming History: The Assassination of President John F. Kennedy. In it Bugliosi goes about to prove Oswald’s guilt and takes apart every conspiracy theory out there. I’ve heard it’s very good. But being over 1600 pages it will probably be quite awhile until I get around to listening to the audio book. There’s only so much time for all this stuff.

It doesn’t seem like the attention and fascination will ever go away from the Kennedy assassination. Old conspiracy theories will continue to flourish and perhaps some creative minds will think up some new ones. Kennedy and the years of ‘Camelot’ will become more and more romanticized as time passes. People will still be skeptical as to what really happened in Dealey Plaza and plenty more books and documentaries will offer up more and more speculation. There’s no stopping it. It will continuously burn like the Eternal Flame at Kennedy’s grave.

I just hope at least people can stop making goofy faces on that ‘X’ in the road. 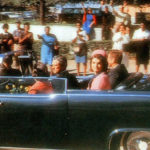 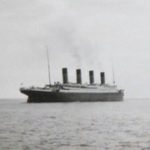 Titanic – A Ship That’s Being Remembered 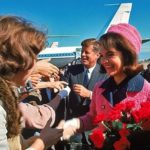