Matthew Quigley (Tom Selleck) has just spent three months traveling from Wyoming to the Australian outback to apply for a job. Rich landowner Elliot Marston (Alan Rickman) is looking for sharpshooters with a very special talent with hitting their targets at extraordinary distances, and that’s one thing Quigley is quite skilled at.

Proving his talents Marston hires Quigley, but once he learns more details about what he’s asked to do no amount of money offered will make him to it. Marston wants Quigley to kill the native Aborigines that live on his expansive land. Quigley refuses, Marston doesn’t like that, so he beats Quigley and dumps him, along with Crazy Cora (Laura San Giacomo) in the middle of the outback to their expected deaths.

However, Quigley is a resourceful cowboy and won’t just be left for dead. Somehow he miraculously battles the harsh environment and Marston’s goons to get back to the ranch to have a final showdown with this villainous landowner.

Selleck might’ve been a a tv star driving Ferrair’s and hanging out in Hawaii, but he never really took off in movies. Maybe it was some of the bad choices he took. When Magnum P.I. left the airwaves he turned his attention to focus on theatrical films, but didn’t have much success. Let’s face it, for every box office hit he starred in like Three Men and a Baby, he had more misfires, like Mr. Baseball, Folks! and An Innocent Man. Let’s face it, no one’s careers were helped who were involved in Her Albi.

However, Selleck looks quite convincing wearing a cowboy hat and chaps and finds a role that suits him. Quigley becomes one of the best cinematic outings in Selleck’s big-screen career.

Quigley’s sharpshooting scenes are captivating, there’s some suspenseful buildup to them and the movie milks them for all their impressive glory. Violence is definitely upped since the days of John Wayne with his six guns. When Selleck takes bad guys out with his specialized rifle they just don’t fall down, they get jerked off their feet and fly through the air. The movie makes the impacts hard and lethal when Quigley sets his sights on them.

There are some amusing moments as Marston’s men act very nervous when ordered to catch Quigley as they are already aware of how dangerous a man he can be. Gun fans should relish the details on Quigley’s weapon. It almost gets as much screen time  as the actors.

San Giacomo I do find to get a bit grating at times. She really plays up the ‘crazy’ to her character. Cora has a haunted backstory that involves a screaming baby, which she gets to redeem during her time int he outback. There’s also not surprisingly a bit of romance between Quigley and Cora.

One particular moment towards the end with Quigley simply stopping and looking back at her could make the ladies well up and have a tearful ‘Hallmark’ moment. The Australian landscape looks beautiful and harsh. The gun fights take place in a variety of places, rocky mountains, around burning houses and of course over great distances. are well put together and exciting. They could’ve added a bit more Australian culture to the film to make it stand out, aside from some shots of kangaroos.

The Aboriginal story works well and is the main attribute that gives the film a unique Australian flavor. The Aboriginals are almost stand-ins for the American Indian. Had Quigley been in a traditional western set in America the story could have unfolded with Native Americans as the victims of Marston’s distain. There are naturally western cliches, but Quigley doesn’t seem to be wanting to reinvent the western genre, just to be a new addition to it. It has all the elements to make an adventurous western tale, it’s got the actors, the story, a terrific score by Basil Poledouris, and it delivers. It’s an underrated gem. It should’ve been a bigger success.

Selleck is commanding, likable, believable and fits right in as this western hero. Had Quigley been a hit it could’ve been a role he could have revisited a few more times.

When you needed a villain for a film you couldn’t go wrong with Rickman. He always added a bit of cheeky humor to his bad guys too which is always a plus, and here he’s no different. He always appeared to relish playing dastardly characters and he could make you enjoy watching him so much, while also booing his bad guys.

If you’ve never seen Quigley Down Under makes for a fun weekend afternoon flick. 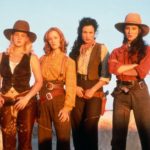 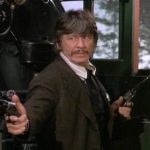