When I started my James Bond film reviews four years ago I never anticipated to still be doing them. It was one of my earlier attempts at doing video reviews and I just thought I would give them a try. Those early parts were really rough and I can’t bear to watch them today. That narration of mine was really bad. But at the time I simply figured – I’m a fan of James Bond and these could be fun projects to work on.

Longtime fans of my Bond series probably know these were originally meant to be quick one-minute reviews of all the films leading up to the release of Quantum of Solace in 2008. I didn’t make that deadline and after having missed that objective I started to take a bit more time with putting them together. As they progressed they began getting more indepth and much, much longer.

The Timothy Dalton Phase got more attention than the entire run of Connery. The Bond Blueprint gave me a chance to breakdown the components of what makes a ‘Bond Film’ a ‘Bond Film’, a project that I had always wanted to do. The Brosnan Age practically became a mini-series of me talking about his four films.

Daniel Craig obviously would be up next. Leading up to him I thought it would be fun to take a look at the other adaptations of Casino Royale – the 1954 TV production and the 1967 spoof film. Both projects were fun to work on and I actually learned some interesting things from researching them. (The ’67 spoof film has more great behind the scenes stories than possibly any other movie ever made!) So now it’s Craig’s turn. It’s somewhat strange to be working on films about a Bond actor in the series that’s still our current Bond. It would be nice to look at all his Bond films collectively together and get an overall picture of his run as Bond, but if I waited until Craig leaves the role before I started looking at his films I could be waiting until 2016 or 2017. That would be quite a long stretch.

Now with the release of Craig’s third Bond film Skyfall practically here I thought this would be a great time to start my look with his first Bond film 2006’s Casino Royale.

I usually like posting the entire review of a film all at once. I would much rather have folks who want to sit back and watch the whole thing in one sitting be able to, instead of spreading it out over parts posted over the course of weeks. This time I won’t be able to do that. Unfortunately, my time has been stretched so much lately that I’m behind on completing the Casino review with that Skyfall deadline looming ahead.

So I’ve posted the intro – one of those nifty, montages that I enjoy making so much – for now and the actual review of the film will be posted in subsequent parts as they’re finished. I’m going to try to get it completed by Skyfall time, but if worse comes to worse and the review isn’t completed by the release of Skyfall at least I’ll be able to get the intro out to those who want to watch it.

Also, Youtube subscribers of mine know that the ‘Tube has rejected my recent Bond reviews. So fully anticipating this will happen again, I’m going to make the actual film review portion of this first Craig film available on my website. I will make an announcement video when the entire Casino Royale review is completed and ready to watch.

I, like all you other Bond fans, will be going to see Skyfall, so I will probably make either a video or blog about some of my thoughts after seeing it. It won’t be one of those long reviews I do, just something short. A longer review will most likely happen down the road. After a Quantum of Solace review of course, which I’ll probably do early next year.

After the Casino Royale review is completed and Skyfall comes out I want to take a step back from Bond and work on some different stuff for awhile. But I plan on continuing these Bond reviews. They might be longer and more indepth than how they originally started, but essentially they’re still a Bond fan just sharing his thoughts about the films.

Thanks again to all my fellow Bond fans who have been following and enjoying this Bond series of mine! Here’s hoping for the best with Skyfall! You know…that other big Bond project that’s coming out this year. ;o)

THE CRAIG RECONSTRUCTION: THE INTRO

Casino Royale (2006) Review Part One from HaphazardStuff on Vimeo. 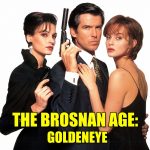