It’s Christmas time and Raymond Chandler’s hard boiled detective Philip Marlowe gets hired by pulp book publisher Adrienne Fromsett (Audrey Totter) to find the wife of her boss Derace Kingsby (Leon Ames). A telegram says the wife decided to leave Kingsby, go to Mexico and marry a man by the name of Chris Lavery (Dick Simmons). But Lavery claims he hasn’t seen this woman in over two months. It appears the wife has mysteriously gone missing.

Marlowe begins investigating her disappearance and is soon trading barbs with broads holding guns, dealing with no-nonsense hardboiled cops, having tough guys take swings at him and quickly having his own life is in jeopardy. To make this Marlowe mystery extra unique the whole film is shot from Marlowe’s own viewpoint. We experience Marlowe trying to crack this case from his own perspective! With it’s first person camera The Lady in the Lake is certainly one of the more interesting adaptations of a Marlowe story, although not a completely successful one.

I thought Montgomery, who also directed the movie, made a pretty lightweight Marlowe. Sure, he’s off camera for most of the film. We catch glimpses of him in mirrors sporadically, but even his voice doesn’t really have a very commanding presence when he’s exchanging dialogue with his on-camera actors.

Montgomery falls into the background, becomes a placeholder for our hero and more of an impression is made with the novelty device of the camera being a stand-in of sorts for the Marlowe character. I have to admit this is what got me especially intrigued in watching The Lady in the Lake. And it is fun for awhile. There are some of the more obvious things you might expect to see from this technique being used – Marlowe’s hand reaching out opening a door, picking up a note and holding it steady into the camera lens, catching the eye of a saucy secretary and following her gaze across a room as she stares straight into the camera.

But the gimmick starts to wear down pretty fast. There are some very odd choices to keep this first-person view going throughout an entire film. My favorite is as Marlowe talks on the phone we get a closeup of the receiver on the side of the screen as the camera lingers lingers on a wall. Or when he’s in a car wreck and someone pours bourbon on him (i.e. the camera lens). According to this point of view Marlowe gets it poured into his eyes. There really isn’t much more that Montgomery can think up to do with this first person presentation. I thought Totter was the real attraction in this. She has extended dialogue scenes with ‘Marlowe’ and naturally she has to play all of them right to the camera. She had me more engaged than anyone else in this film. She gets a bit over the top at times, but it’s Totter who really becomes the most entertaining part of of the entire movie.

It’s between her and Marlowe where the sharpest, most memorable dialogue is spoken too.

She says, “I wonder how it would be to discuss this over a couple of ice cubes. Would you care to try?”

That’s pretty decent. Sadly, you’re not going to find a lot of that great classic Chandler dialogue from his books in this.

At certain points I was dying for Marlowe to step out of this camera straitjacket and see Totter and Montgomery play a staged scene in front of the camera rather than her having to talk directly to us constantly. It started to feel like one of those old educational films kids used to have to watch in school.

It’s as if they thought the gimmick of the first person character would be enough to sustain an entire film and there ends up not being much else here. The pace drags. Tension and suspense never begins to build with the story, even during the climax with guns drawn. The first person scenes get repetitive and scenes are consistently staged the same way as the previous one. There’s not a lot of variety going on. As I said there’s not many different ways Montgomery creates a scene with the camera walking into a room and talking with the person who’s waiting for him. He throws in a few ‘looking in the mirror’ shots, but that’s pretty much it.

Other than Totter the actors and performances are forgettable. It was probably a challenge for many of them to have to play directly to a camera. It certainly wasn’t common thing being done in Hollywood productions at the time. I imagine it was something none of them were accustomed to.

By the way, Jayne Meadows shows up in this – I would never have recognized her had I not known she was going to be in this and I had been waiting to see her.

This is a different approach for a noir and was an innovative experiment for its time. I wonder if the studio had reservations about Montgomery shooting an entire movie this way. I would think many people thought Montgomery was crazy to even try this. Unlike Alfred Hitchcock’s Rope which used the gimmick of extended long takes, The Lady in the Lake fails at being an entertaining movie. It might be told in a unique way, but it needed more to make it a riveting mystery.

I would say it might be worth watching for the curiosity of it. I have to give it credit for wanting to try something different, but it ends up as a miss. I think you could probably watch one or two clips from the movie and get the general idea of the execution of this experiment and not be missing any thing further from it.

The trailer promotes the milestone technique of movie-making. “You get to play the starring role!” I don’t think it had that much of an impact.

Here’s a clip from the film with Totter – this should be enough for you to get the idea of how the film plays. 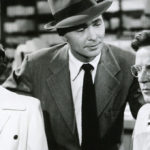 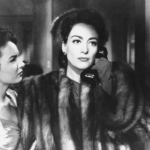