Sometimes you’ll passively sit down and watch a movie and have it deliver exactly what you expected. It’s not better or really much worse than what you were anticipating. It would be great if it really surprised you. If the movie was a lot better than you thought it would be and you ended up enjoying it much more than you thought you ever would.

But it wasn’t and you didn’t. After it’s finished you shrug your shoulders, accept that ‘it is, what is’, don’t have any hard feelings and just move on.

That was my reaction to The Last Stand, Arnold Schwarzenegger’s first starring role in ten years.

Schwarzenegger is Ray Owens the sheriff of the small border town Sommerton Junction, Arizona. Not a lot is going on in Sommerton. Cats get stuck in trees, there’s some parking violations and the town nut Lewis (Johnny Knoxville) carelessly fires guns at chucks of meat. It’s going to be a quiet weekend as most of the residents leave to watch the high school football team play out of town. There won’t be much to do for Owens and his deputies.

Until, what do you know! Gabrial Cortez (Eduardo Noriega), a powerful drug lord makes an elaborate escape from the FBI in Las Vegas. This feared drug lord takes Agent Ellen Richards (Génesis Rodríguez) as his hostage, he climbs into a powerfully modified Corvette that can reach speeds of over 200 mph. He handcuffs Richards, fastens his seat belt and leaves Agent John Bannister (Forrest Whitaker) in the dust as he heads to the Mexican border. Without any hope of catching up to him, it’s up to Owens and his outgunned, inexperienced team of deputies to stop Cortez and his band of mercenaries from getting through their town and stopping Cortez before he can enjoy the sweet taste of freedom.

This is not a great Schwarzenegger movie. It’s not bad and it’s not necessarily good. Everything about it is average. The characters, the setup, the humor, the story. It all just feels very routine and not very inspired.

Even the action, which has a few moments, didn’t excite me much and felt like it was going through the motions. Director Kim Ji-woon stages the action scenes relatively well, but there’s nothing creative or inventive about what unfolds. The movie really could have used some more unique setpieces.

The hackneyed characters is what I was most amused by. It’s like they took most of them out of the ‘Clichéd Action Movie Playbook’.

Let’s see. We have the head FBI agent who is helpless and angry. Whitaker spends most of the movie in the FBI office barking orders at his agents, but the best is when he learns of this small town sheriff and utters one of the most overly-used lines movies – “Who is this guy?”. I really started laughing hearing that. That’s the line that cues us we are now going to learn about Schwarzenegger’s background. Then we have Deptuty Sarah (Jaimie Alexander) and her ex Frank (Rodrigo Santoro) who never follows through on anything. Do you think there will be some arguing between them, they might possibly rekindle their relationship and Frank will come through when it counts this time?

The young Deputy Jerry (Zach Gilford) who wants to leave quiet Sommerton for the exciting life of L.A. and really get into the action. Arnold knows better, tries to dissuade him, but is willing to help him with the move when Jerry is adamant about leaving. What do you think will happen to good old Jerry?

Cortez is a standard bad guy – arrogant, cocky and wears nice clothes. His main henchman Burrell (Peter Stormare) is a poster boy for ‘main henchman’ – slicked hair, goatee, no-nonsense, deadly and enjoys his work. Luis Guzmán is meant to provide some funny one-liners and we’re really expected to like and root for him.

There’s the sedate reactions of the unafraid small town residents so wrapped up in their relaxed lives they don’t care of the danger headed their way. Schwarzenegger makes some references to his age.

They really promoted Knoxville in this. I saw him in interviews with Arnold, he was featured in all the promotions, they made it seem like he was an important sidekick in The Last Stand, and he ended up barely registering with me in the movie. He’s just a silly, forgettable goofball character who wears funny hats, goggles and acts like a spaz. These characters were old when they continuously popped up in all those 80s action films. Nothing new to see here. The one character that really jumped out at me was Génesis Rodríguez as Agent Richards. Not because Richards was a compelling character or anything like that, but because Rodríguez was so extraordinarily hot!

They try to dress her down a bit and make her look like an agent, but I could see past that smokescreen. It’s too bad she spends most of the movie sitting in a car. I hope to see her again in more sophisticated roles where she gets to stand and walk around more.

Fortunately, like I said I didn’t have high hopes for this movie. If I did then all this stereotypical action movie nonsense would have really irritated me, but I just let out a little sigh when they came up and continued watching. This wasn’t a triumphant return to big-screen action for Schwarzenegger. Maybe he’s just getting his feet wet and is starting out small with his return.

Fans might notice that he never utters his signature catchphrase “I’ll be back” anywhere in The Last Stand. Maybe that quotes absence was the thing that was supposed to make the movie special.

Hopefully Arnold will be doing something that will come closer to some of his better action films. The Last Stand I’d rank towards the lower end of his movies. It’s one of those movies where I’ll know I had seen it, but don’t remember much about it.

Other than that hot FBI Agent. 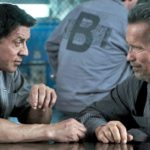 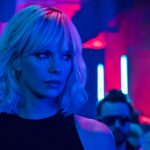 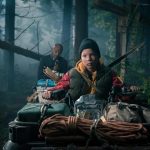