If anyone had any doubt that 1988’s Die Hard hasn’t been the most influential action film in the last twenty-five years, you only need to look at the assembly line of knock off movies it has inspired.

It created a blueprint for action films to follow. A single location. An army of bad guys. Hostages. And a lone hero trying to save them. The single location might change from film to film, but the rest pretty much stays the same.

Even after all these years that Die Hard-blueprint is still being used in not one, but TWO big-budget films from this past year. AND both of them have their lone heroes in the midst of a terrorist takeover in the White House. It was bound to happen at some point I suppose.

Olympus Has Fallen has the more intriguing title compared to White House Down. It’s just a little bit more serious and cooler sounding. It’s essentially the same story though. Then one snowy night on the way home from Camp David there’s a car accident. Banning manages to save the President, but First Lady Margaret Asher (Ashely Judd) is killed. Banning feels responsible, the President doesn’t want to be reminded of the tragedy, so Banning leaves for a less stellar job at the Treasury Department.

Fast forward eighteen months, South Korean diplomats are visiting the White House when guerrilla forces from North Korea led by terrorist Kang Yeonsak (Rick Yune) attack and kill every agent and soldier within sight and seize the President’s pad. All hope is lost and the Prez looks like he’s in major trouble. Except Banning manages to sneak inside and becomes a rogue element in the bad guys plan.

From there the action cliché boxes are ticked off – a threatening villain, a seemingly perfect plan unspooling, hostages being executed, communicating through walkie-talkies, a roomful of the ‘people in charge’ debating and lecturing the hero, the thankless role of the concerned wife, the ticking clock, a bad guy acting like an ally, saving the kid. It’s all familiar stuff and here it’s all extremely forgettable.

The one thing that distinguishes these Die Hard-type of movies from each other is the location. Let’s see how the location is utilized and exploited to give us some uniquely staged action scenes. Olympus Has Fallen doesn’t do much with that. The action could be unfolding in some random mansion and I would never have known the difference. The most exciting sequence is the initial takeover of the White House. Director Antoine Fuqua makes the sequence unfold with an aerial attack followed by a ground assault. It’s exciting, violent stuff and fairly well-staged.

It’s the only point where the film gets to destroy some DC landmarks (that’s a standard thing to do in movies today – you got to lay some recognizable structures to ruins) and it gets to have some fun with wide aerial views of the chaos unfolding in the nations capital.

Other than that one portion of the film there’s not much else here. The story is inconsequential. All you really need to know are the bad guys are bad and the stakes are pretty high. No more needs to be said.

All the actors just go through the motions. Butler is adequate in the action role. I’ve never been too crazy about the guy, but he’s certainly better in this type of role than those insipid romantic comedies he was making for awhile.

Eckhart, Morgan Freeman, Angela Basset, Robert Forster, Dylan McDermott, Rick Yune, yeah they’re in the movie, they play the uninspired standard roles you would expect to see and do nothing special in it at all.

I had hoped this might have been an entertaining dumb Saturday night popcorn flick. Nothing extraordinary, but effective for what it was designed to be. Instead it’s a very tired actioner that offers nothing original and what’s here is stuff we’ve seen countless times before that’s been done much, much better. 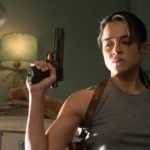