Normally Robin Williams seems to have gone the route of making family friendly films that are really pretty lousy and just squanders his talents that we all know he has (much like Eddie Murphy). His recent films – Old Dogs, License To Wed, RV, makes me wonder if he really lost his way.

However, every now and then Williams takes a chance with a smaller, more offbeat choice and it reminds me that he doesn’t have to rely on doing his ‘Robin Williams schtick’ to be funny, he actually acts and plays a character.

Directed by Bobcat Goldthwait World’s Greatest Dad is as far from the light, Disney-fied films he’s done lately as you could get. Williams plays Lance, a high school poetry teacher who has consistently failed at his long-hoped for writing career. Relegated to having everything he writes rejected and stuck teaching to a handful of uninspired students, Lance tries to get some kind of bonding to happen between him and his distant son Kyle.

Despite Kyle being about the most unlovable a character he could possibly be Lance tries his best with his son.

I won’t say anymore since when I watched the film I went in completely cold, didn’t know anything about the story and don’t want to be the one to spoil it for others.

Suffice to say the story heads into some pretty dark territory and at times I was surprised at how far it went. The hypocrisy and selfishness of some of the characters is pretty appalling. The film isn’t necessarily a laugh-outloud riot, but it consists of more uncomfortable, awkward-type laughs. And you know what, that’s just fine with me!

It’s not a film for everyone. If you just want to see Robin play a funny priest you’re better off skipping this one. But for me the film was a refreshing break from the silly, tired and mainstream comedies Williams has starred in and the uninspiring ones Hollywood seems to be experts at churning out. 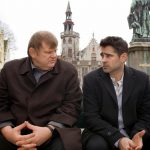 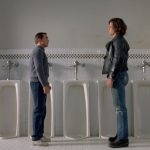