It’s early June 1944 and the Germans will goto any lengths to find out the best kept secret of the war – the plans of the Allied invasion of Europe. One of the few men who knows all the details is U.S. Army Major Jeff Pike (James Garner). While on a mission in Lisbon Pike is drugged, falls into unconsciousness and brought to Germany.

Instead of using their typical methods of interrogation, a more unique approach is used for the well trained Pike. He awakens in what seems to be a U.S. Army Hospital and is told the year is 1950.

American Major Walter Gerber (Rod Taylor) explains to Pike he’s being treated for amnesia and is suffering a memory loss of the last six years. Confused and panicked, Pike gradually convinced of this deception thanks to every detail Gerber has prepared.

Now it’s up to Gerber, with the help of Anna (Eva Marie Saint) playing Pike’s nurse, to make Pike willingly accept the war is now in the history books and there’s no danger of revealing the plans of the invasion. But time is running out. Gerber is only given 36 hours for his ruse to work at which point the the SS steps in to handle Pike in a more brutal fashion. This is one of those movies I unexpectedly stumbled onto one late night years back and happily discovered it to be an entertaining gem. Based off the short story ‘Beware of the Dog’ by Roald Dahl and directed by George Seaton (Miracle on 34th Street, Airport), 36 Hours caught me by surprise.

I didn’t know anything about it going in and got wrapped up into it very quickly. It’s sort of a Truman Show put-on with higher stakes. I think the television show The Prisoner had a similar kind of episode too.

I want to be somewhat careful as to what I talk about with the movie, since my guess is most younger viewers have never seen this and I don’t want to be the one to spoil it if they want to take a chance on it, which they should.

The leads are all very good. Garner always has a friendly presence. You’re waiting to see what if anything will tip him off that he’s in this fake production that’s being put on all for him.

Saint is a sympathetic character as we learn more about the circumstances as to how she was recruited for this assignment. She’s not a soldier but a captive being forced into this performance. There’s a quiet torture she carries from her experiences and it has left a huge mark. She’s doesn’t become melodramatic or overly emotional. In fact, Saint is the opposite and it makes her much more interesting and sympathetic because of it. The real standout is Taylor. From his introduction we know exactly what his scheme is and that’s he’s the enemy. But from listening and watching him go over such a well laid out plan I sort of was rooting for him.

He appears to have thought of everything to create this convincing army hospital – from faked newspapers to radio broadcasts to every German participant instructed to talk English. He’s gone through a lot of trouble. The ‘nice guy’ act he puts on as a longtime American friend of Pikes makes him even more likable. You know you don’t want Taylor to succeed with his plan. How could you want him get the plans to D-Day! But he makes it hard to hate him.

There’s even some mutual respect between him and Pike, with each understanding that they are men just doing their duty. Plus, Gerber has his own adversary in the form of SS officer Otto Schack (Werner Peters) who constantly discredits this idea, gives Gerber a hard time and hopes he will fail. I kind of wanted to see Taylor rub his nose in this plans success.

The last act of the movie is the weakest part. There’s an escape that has to be done and while it’s fine, it doesn’t surpass what came before. Most of the time a story ups the stakes and adds even more heart-pounding tension and suspense in the last act. It is there, but it’s much more a traditional running from soldiers, hiding out, kind of stuff that really isn’t that special.

The actual physical threats Pike faces are less compelling than the psychological chess match he finds himself in in the first half. Pike’s staged stay and the relaxed attempts at extracting the information from him is much more interesting to watch.

So, the movie kind of peters out and begins to drag. The best bit in the last act is distinctive Hogan’s Heroes actor John Banner’s appearance. He is very funny as a German who is making the most of his time while anticipating the eventual American occupation.

I don’t think the film is on DVD currently. Each time I’ve caught it has been on TCM. Although I think it’s available on Netflix. From what I’ve read there was a remake of this in 1989 starring Corbin Bernsen. I’ve never seen it, but I doubt it could be much better. If you get a chance check out this original – and go ahead just try to hate Taylor in it. 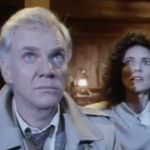 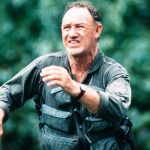 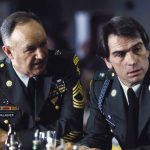