Guy Pearce stars as Snow. He’s a quintessential tough guy. He’s got the muscles, the one liners and the steely attitude. There’s no situation that he can’t handle. That is until he’s sent to an orbiting prison to rescue the President’s daughter who’s surrounded by a bunch of crazy prisoners.

Well, maybe he can handle that situation too….

The premise sounds a lot like John Carpenter’s 1981 futuristic actioner Escape From New York. And that’s pretty much how it plays. Although not nearly as good.

Based on an idea by producer Luc Besson, Lockout seems like a fun premise that could result in an entertaining B-action flick. However, it becomes a boring jumble of badly done, cliched, uninspired scenes that don’t amount to a heck of a lot. Although it did have me shaking my head during the whole thing while watching it though. Pearce is the best part about about this flick. He does a great job at his cheesy throwaway lines and really looks the part for a John McClane-ish kind of hero. He really deserved a better film to get showcased in.

Maggie Grace is given the thankless role as the damsel in distress. She looks very cute and that’s about the extent of her role. She’s a pretty flat, one-dimensional character and unfortunately that’s what plagues every character in the film. They are all so completely dull that by the time the end credits started rolling I already had forgotten them.

We’ve seen all these roles hundreds of times before – the psychotic prisoners, the no-nonsense cop, the wimpy politician – and here the film goes through the motions of these folks, not even attempting to make them unique. Even the actors play them with little enthusiasm. Plus, without a decent villain for Pearce to face off against, the film just feels like it’s killing time.

With a lot of B-action movies, crappy characters could be forgiven if the action and story make up for it. However, again Lockout fails at that as well. With rocket ships, spacewalking and the old reliable crawling through airducts-scenes there’s no excitement to be had.

Even Pearce having a midair fight with a convict over huge industrial fans doesn’t result in any thrills. It doesn’t help that the effects, at best, are average. And that’s being generous. The sizable space-sized story could have really used some more convincing effects to sell it. The way it sits here many action scenes simply feel like you’re watching a dull videogame. The sets are dreary and tired looking. There’s really no standout action scene in the entire film. Not a one.

There’s a secondary story that’s tacked on in which Pearce is trying to clear his name from a crime he’s been accused of, but really I had no interest in it or if he would ever be able to resolve it. Nor did I care about Grace’s humanitarian purposes visiting the prisoners in the first place.

When I first saw the trailer for this I thought it could be a fun, dumb action flick. You might enjoy counting the cliches accumulate into tidy pile by the end though and like I said Pearce really stands out, but that’s about it. There’s nothing wrong with a good old-fashioned, disposable, cheesy action film. I can really enjoy what is essentially cinematic junk food, but it at least has to be somewhat gratifying while I’m watching it.

For me, Lockout wasn’t.

The trailer for Lock-Out 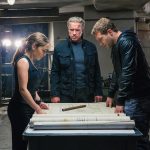 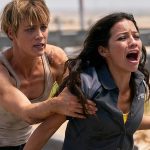