It’s been three years since a spaceship carrying enslaved aliens arrived on Earth. Our planet has become an oasis for these intergalactic beings and three years later in 1991 they’ve assimilated into everyday society. Not surprising they’re also facing fear, bigotry and aggression from earthlings who are not ready to accept their dome shaped mole covered noggins being part of earth life.

Police detective James Caan is one of many who are not thrilled seeing all these ‘slags’ around. When his partner is killed by one of these ‘Newcomer’ aliens, it’s further proof to him they should be viewed with narrow eyes. Determined to catch this alien killer, he agrees to be partnered up with the first Newcomer to reach the ranks of detective, an alien named San Francisco (Mandy Patinkin). Sykes decides to call him “George”.

The duo uncover an underground alien drug ring and zero in on bad alien Terence Stamp who’s up to no good with the manufacturing of an alien drug. Between doing the usual movie cop things of questioning suspects, rattling cages and getting into scraps on the streets, this mismatched pair of cops overcome animosity, they start to trust one another and a mutual form of respect and a friendship grows between them. It’s almost staggering to think back on how many ‘cop buddy’ movies came out during the 1980s. Alien Nation took that popular genre and put a sci-fi twist on it. Rather than a hotheaded slob and a by-the-book pair of cops, this time it was a tough veteran cop and a flat out alien.

It’s not hard to miss the animosity towards the aliens are meant to be a metaphor for real world racism. They’ve done nothing to earthlings but to gain their trust and do their best to fit into society, but that’s not enough. Caan is one of the biggest opponents to the very idea of these aliens hanging out on planet Earth. An attempted seduction by sexy female alien, Caan declines and flat out states, “I’m a bigot.”

It would’ve been nice had the film found more parallels with the plight of the aliens to the real world ie. immigrants. You know how they always say, science fiction can be used as an effective tool to tell some real world issues. Alien Nation kind of skirts over that in a broad way and doesn’t dwell on that aspect much.

Granted, the movie might not have been eager on becoming a ‘message movie’ and wanted to stick to be more of a crowd pleasing sci-fi cop buddy film, but I think it could’ve gone much deeper than just that. The premise is interesting enough that it could’ve been mined in more unique ways than the final results. I don’t mean it should’ve hammered our heads with it, but certainly more could’ve been done with it. By the way, I always thought Alien Nation would make a decent double feature with 1985’s Enemy Mine.

The simple alien designs with the dome heads work. They aren’t fancy, but they are effective. It is fun to learn details about the aliens as we go through the story, such as sea water being like acid to them and them having unique vulnerable soft spots on their bodies much like us humans.

The actual case our duo is investigating isn’t all that interesting. It’s basically a drug case that might’ve been seen in an episode of Miami Vice only with an alien twist. Rather than cocaine, it’s a drug that has a dark secret history with the aliens that can lead them to be quite violent beings when too much is taken.

It’s an extremely A to B to C story. There’s not much excitement and major reveals to it. One action highlight is a nice old school car chase through the streets, that should have left Caan’s car in pieces.

The best parts of Alien Nation are Caan and Pantakin. They play surprisingly well with each other as these polar opposites. Patinkin’s George is relaxed and has a pleasant pleasing demeanor contrasting to Caan’s constant irascible, annoyance. They’re easy standard scenes and nothing revolutionary – grabbing lunch together and Caan being horrified by George’s diet of eating beaver, their different approaches to questioning suspects, Caan getting annoyed by George, then finally bonding over a night of drinking. George guzzles sour milk to get hammered. George has a stable family home and schools Caan on its importance, which makes him reevaluate his estranged relationship with his daughter.

Let’s be honest, we’ve seen all these types of scenes before in similar buddy movies. But they are executed well and watching this pair becomes really enjoyable to watch. That’s my favorite stuff in Alien Nation. I almost wish we got to have more of these types of shorter simpler scenes than have to go on the drug case they’re on. Caan and Pantakin are an odd pairing. I’m sure there were other actors considered for the roles to be teamed up for this. I would never have thought of teaming these two actors up, but they do have a fun, unexpected chemistry.

I did always find it odd that Caan found himself in this movie. He had starred in one of the first ‘cop buddy’ films with Freebie and the Bean back in 1974 with Alan Arkin, but Alien Nation seems like a very unexpected choice. It’s just not role or genre (mainly the sci-fi angle) I would peg him as doing at this point in his career.

One moment I always enjoyed is when George gets extremely nervous the closer they drive to the ocean. His panic shows how lethal that sea water can be to his alien race. I always wondered, if sea water can kill the aliens, then why did they all settle in L.A. and not in Utah.

I never saw the television show that would come out later based on the movie. Somehow I suspect it took the premise much further than the film, used it in more interesting ways and had the time to explore it much more than the film being a mismatched cop buddy flick with a twist. But having never seen the show I could be completely wrong on that. In a way, a good description for Alien Nation would be to say – it’s an expensive premiere episode for a television series. It sets up the premise, the characters, the rules, doesn’t go too deep with it and sticks to being a cop buddy action movie to hook in an audience. If you want weightier stories that really seize on the potential of this concept you can watch later episodes.

In the end, for what it is Alien Nation is a passable sci-fi/cop buddy B movie. There’s not a lot that will stick with you after watching it. It’s fine, but nothing extraordinary. 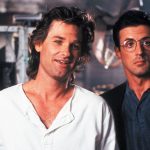