Waterworld was one of the most notorious and expensive film productions in cinema history. Filming on water will always complicate things and to create this post-apocalyptic floating story the conditions, complexity and relationships of those involved made the movie struggle to finally reach the finish line.

Not only did the film strain the friendship and working relationship between frequent collaborators director Kevin Reynolds and star Kevin Costner (they eventually reunited to work on the 2012 min-series Hatfields & McCoys), Waterworld famously resulted in staggering cost overruns which ballooned the $100 million dollar budget to $175 million.

That final number is what christened Waterworld as the most expensive film ever made up to its point of release.

Let’s take a step back and forget all that. Sure, it’s fun to read the tumultuous stories about the production. The complete mayhem that resulted in this wet colossal film production. That all makes an entertaining story all on its own. However, when I buy a ticket for a movie, the only thing that matters to me is the movie itself and what I’m about to watch. Whether it’s the most expensive film ever made or the cheapest, whether the production was a leisurely dream or a chaotic nightmare, it ultimately shouldn’t matter to the moviegoer.

The dramatic backstory and what was happening behind the curtain shouldn’t effect my experience of the movie itself. The only important thing when the lights go down and the movie starts to flicker on the big screen is if the final film is entertaining or not.

I recently rewatched Waterworld now with almost twenty years of distance from all the behind the scenes baggage that was the focus of it when it first was released. It turns out to be a film with an interesting idea, a few fun action setpieces and a bunch of forgettable characters. It ultimately results in an average action flick. It might be a good diversion to pass the time, but none of it ends up making the damp adventure very memorable.

The polar ice caps have melted and submerged all the land on our planet. This is illustrated by a very neat opening of the earth in the Universal logo being covered by water.

Costner plays the mysterious, taciturn ‘Mariner’, literally a man who is drifting around this aquatic world surviving through some trading and his own unique ways. There is something extra special about the Mariner. He is a mutant who is the next step in the evolutionary chain. He was born with webbed feet and gills, which allows him to breathe underwater. That seems to be where the human race is headed if they want to survive. The Mariner arrives at a floating trading post called an atoll, he meets Helen (a hot Jeanne Tripplehorn) and Enola (Tina Majorino) a young girl with a strange tattoo on her back that is supposedly a map to the mythical ‘Dry Land’.

As with most post-apocalyptic movies, it’s not enough to survive the conditions you’re placed in, but there always has to be some bad guys that make things even worse for you. In Waterworld they come in the form of ‘smokers’ – simply bad guys who will do anything their leader the Deacon (Dennis Hopper) tells them to do – and right now he wants that little girl with that map on her back at all costs. At the moment however, that little girl is sailing along with the Mariner and Helen who are not too anxious to give her up.

Waterworld is a clear descendant of the Mad Max movies. It’s basically the same kind of movie, except this time instead of cars they’re using boats. And Costner’s boat is a pretty pimped out ride. He’s got all these cool tricks and defenses in it that he can pull out at the turn of a few cranks and it results in some pretty fun stuff.

They knew the Mariners boat would be an important prop to have in the film and it doesn’t disappoint. It’s actually more sophisticated and cooler to watch than some of the human characters. Costner is a likable guy onscreen, but I never thought he was cut out as a ‘Man With No Name’ dangerous, tough guy-type. I suppose he’s fine in certain instances, but most of the time it feels like he’s trying a bit too hard to be this ready-for-action Mariner guy. I like him much more when he’s a more vulnerable character and gets to play the scared, nervousness of the suspenseful predicament. Remember the climax of The Untouchables?

When Costner does that thousand yard stare and tries to be intimidating it’s not the most convincing thing I’ve seen him do in a film. For some reason he was getting drawn to these roles at the time. Not long after Waterworld he ventured back into the post-apocalyptic wasteland in The Postman. That role didn’t help his career much.

Jeanne Tripplehorn had some fleeting high-profile exposure in the mid-90s thanks to her roles in Basic Instinct, The Firm and Waterworld. She looks awfully good here, perhaps too good for the conditions that her character is meant to be living in.

This is the kind of suspension of disbelief I have to swallow to enjoy these kind of movies. We have characters living in sopping squalor, everyone is wearing rags and here Jeanne looks stunningly gorgeous. I mean, if I saw her in a Starbucks I would be doing double takes, let alone seeing her on some floating outpost in the middle of an endless ocean.

There are parts of Waterworld that hint at the intriguing concepts and solutions of how humans would live on water. Would their diets solely consist of fish? Where would they get fresh water from? Would your pee suddenly become valued? I wish there was more of that, exploring how humans would adapt and survive in these conditions.

The movie really isn’t interested in that stuff and spends most of its time on the spectacle of action sequences consisting of Costner getting attacked by nameless henchmen on jet skis, firing an endless barrage of bullets at him, explosions going off and Dennis Hopper chewing the aquatic scenery.

There is a real leap you have to take with the logic to a lot of what’s going on. Just one of the things that always bothered me is the endless supply of cigarettes the bad guys are smoking. Where would they have come from?

It would have been different if cigarettes were portrayed as a rare commodity that is used as a valued trading object, but these guys have them hanging out of their mouths in every scene. There’s more smoke here than in a 1920s newspaper office. It’s already established that paper is a treasured object – but cigarettes aren’t. It just doesn’t make any sense. Leaving your science book at home and looking past all the lapses of logic there is enough in the film to make it a so-so enjoyable adventure. Costner is always running around, grabbing ropes, making knots, swinging around on his boat and taking out his attackers that it delivers in some fun.

Waterworld never reaches the heights with which it could have had. It has the large sets, a big cast of dirty extras and Costner’s awesome trimaran, which offers up some effective spectacle.

There are certain shots of the then new CGI effects that look flat and not very convincing. The moments they do pop up it’s kind of jarring since they look very out of place. Fortunately, there are only a handful of those and the water stunts and pyrotechnics are for the most part done for real.

That’s the main reason to watch here. The endless seascapes and action setpieces are the star attractions. Had the main characters been fleshed out more, if they were helped out by some unique supporting characters and the story was a bit more intriguing besides simply bad guys attacking good guys on the water, Waterworld might have been a great sci-fi action film. I can actually envision a spinoff television series of Waterworld happening. That seems to be the popular thing to do today. Some creative writers come along, take a different approach to this setting, expand on the ideas of the story, fill it with some interesting characters, give them some dramatic relationships while having to overcome an endless heavy duty series of obstacles in the hopes of finding Dry Land. Sort of like a soaked version of Battlestar Galactica.

Not that I think it would ever happen, but I think there’s more to explore in this seafaring world than what the film did. There must be more with this idea than just turning the sets into some kind of theme park attraction.

While rewatching Waterworld it started to remind me of the recent John Carter. They both were conceived as being these big-budget crowd pleasing expensive sci-fi adventures. Unlike John Carter,I don’t think Waterworld deserves the emblazoned stamp of being a failure as much. It’s not a rousing success, but it is by no means the cinematic disaster its legacy has made it out to be. 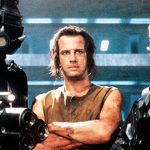 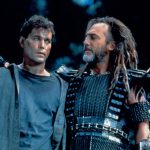