A hitman from Cleveland arrives in New York City to do a job. He’s assigned to kill a mid-level mob boss by the name of Troiano (Peter H. Clune) and plans to do the job cleanly and quietly.

Frankie Bono (Allen Baron) is an intense, meticulous no-nonsense killer. He carefully follows his prey to determine the ideal location to carry out this murder. Despite it being Christmas week and the festive atmosphere around him, Bono tries to keep a low profile. He’s simply aiming to await his opportunity to complete his job and disappear.

However, he runs into an old friend and ends up socializing a bit more than he had planned. Unexpectedly Bono’s focus shifts from his hit as an old gal pal takes pity on this solitary man.

Making some sloppy mistakes he jeopardizes his ability to do this hit as cleanly and quietly as he wanted. However, Bono is reminded in no uncertain terms this contract is something he simply can’t walk away from – no matter what the risks are.

Blast of Silence is quite a unique film. It’s an extremely low-budget film noir using whatever locations director – also Baron, who also wrote the screenplay – could get his hands on and manage to use. As a result he creates a moody, atmospheric story with creative compositions, dramatic lighting and some very rich narration by Lionel Stander. There’s also some clever visual metaphors to go along with it. New York City circa 1961 comes alive as a background character which this taciturn figure moves through. The fact it’s Christmas time contrasts even more to who this person is from the normal citizens and how oblivious the character is to the normal lives that surround him.

The story itself is as straight forward as it sounds. And while it may read as a rather routine plot, it’s the way it’s all presented that makes it an existential journey we take with this character.

One of the things I was so taken with the film was the locations and how Baron utilized them. Simply seeing the action unfold in these striking NYC locales in the background gave the film a raw flavor that so many other films of this period lack. Scenes are clearly taking place in the real world. There’s no use of back projection or any trickery. Even the driving scenes with a camera in the back seat as Bono tails his prey results in some riveting simple sequences.

The way Baron staged such seemingly simple scenes is again a testament to his creativity and imagination. There’s a ‘new wave’ flavor to the whole thing, which makes it posses an even more distinctive vision. There is one particular famous shot that simply is a street and Baron walking down it. It could of been a throwaway shot, but because of the composition, the black and white photography and the music that accompanies it, it results in an incredibly effective exciting shot.

The Criterion dvd has some wonderful interviews with Baron, along with him taking a walking tour of New York revisiting the locations he used and the stories of how and why he choose them. It’s a fascinating behind the scenes extra. Blast of Silence is almost a time capsule of NYC from the early 60’s.

Big Ralph (Larry Tucker) is an overweight, sloppy, rat-loving connection Bono meets. The rat symbolism shouldn’t be lost on anyone. Their stark confrontation is surprisingly violent and gritty for a film from this time, thanks in large part to Baron filming it in such a rough, handheld way. He also employs a wonderful use of shadows, lighting and silhouettes, one of the major classic tools to create his film noir. That particular scene and many others, are scenes that we’ve seen in many noir/gangster-type of movies. The hitman picking up his gun, the dealer trying to strong arm him, the lead-up to the murder, the hitman leaving the scene unnoticed.

But again, it’s how Baron stages and films it all and his choice of locations that make each one all the more powerful and memorable. It makes things even more impressive keeping in mind that Baron had to create it all on such a shoestring budget.

It’s about a hundred minutes and the pacing kept things moving and it didn’t need to be any longer to do the job at hand.

Blast of Silence really proves that if you have the passion and imagination and want to make a movie, despite not having many resources to use – you can. And you can make a pretty darn good one! It’s one of those small movie gems. 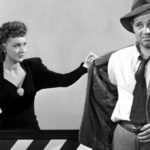