Taking its cue from DC Comics new 52, a newly revamped take on the Justice League forms to stop an alien invasion by the evil Darkseid.

To make this short – I just didn’t like these people.

The characterizations and interplay between the individual team members is what makes Justice League so much much fun. That’s one of the main things that I always enjoyed reading and watching. The rocky dynamics between these characters has always been a major draw of Justice League.

Here, there seemed to be an oversimplification of these classic heroes to the point of making them annoying and boring. What would normally have been dramatic conflicts with them teaming up, having to work together to save the world with some humorous character clashes sprinkled throughout becomes a group of characters who are each more annoying than the next.

And with a story that’s really a pretty hum-drum and bland ‘aliens are invading the Earth’ tale, the movie needs some rich, dynamic characters to watch. And sadly, we don’t get them. The focus appears to be less on the characters and more on the destructive fights.

Superman is ready to punch, punch, punch and comes off as a bully. Green Lantern is a cocky douchebag who at no moment I believe warranted ever being given the lantern ring. Captain Marvel – now simply called Shazzam – is an arrogant adolescent with super powers. When Wonder Woman speaks up most of the teams response is to hit on her. And Darkseid is simply a destructor who says barely anything, shows little intelligence and is just a brute.

I’ve read someone describing this film as ‘if Michael Bay made The Avengers‘. And sadly, that’s a pretty apt description. I haven’t been crazy about this New 52 revamp and the majority of choices that I’ve heard that DC has implemented had me puzzled. After finally getting a big taste of this adaption of the new era of DC heroes I can’t say I’m too interested to follow it any further.

There are some good things in this flick. Some of the animation during the battles are nicely done. Batman is Batman. After so many years of him being the focal point of so many stories DC knows he’s an institution and not to mess with him too much.

I think that’s about it for the positives.

I, like so many other fans apparently, am not a fan of a lot of these redesigns. Many of the characters are simply not likable. The costume redesigns are another thing that I just haven’t gotten used to.

I’d hate to say that I don’t like change, that I just like the old Justice League and any alterations to it is sacrilege. I am more than welcome for change, but if they’re going to do it than do it for a reason. I don’t really see many improvements in a lot of the alterations to the costumes other than simply making them different for the sake of it.

On top of all that. unlike previous DC animated movies none of the voice casting here left barely an impression. The animation didn’t look anything special. Plus, the delicate balancing act of allowing all the characters to shine seems off. Some of the characters are there and are given very little to do. Flash and Shazam seem to fall into the background. I wouldn’t have even minded that Cyborg takes center stage as a founding member of the Justice League (which I suspect this change had to do with making the team more inter-racial). However, his story is not the least bit compelling. I would have been wary of WB’s future animation projects since the departure of producer Bruce Timm anyway. With Batman: The Animated Series in 1989 I became an instant fan of his and he continued that quality of work through other television and straight-to-dvd projects.

They weren’t all great, but I came to associate his name with the mark of quality for DC’s animated projects. So I had some trepidation about what would happen when he was no longer overseeing these projects.

I’m not sure if it was Timm stepping down or my cool feelings towards DC’s new 52 relaunch, but I thought Justice League: War was a complete washout. Perhaps the 52 revamp reads better in the comics and they just missed the mark in adapting it.

I still anticipate one day DC swallowing their pride and abandoning the whole New 52 concept. I haven’t read any of the new stories, but I’ve heard more negative reaction than positive about them. Whatever the reason this was one of the worst DC movies I’ve seen on all levels. 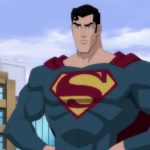