Only two short years have passed since Brosnan reignited the 007 flame in the extremely popular GoldenEye. A followup was inevitable and producers quickly fast-tracked Brosnan’s encore on the heels of the renewed Bond excitement from GoldenEye.

Director Roger Spottiswoode’s entry in the series takes a plot that is literally ripped from the headlines. This time out 007 has to stop a powerful media mogul who is setting his sights on obtaining exclusive global media coverage. Elliott Carver (Jonathan Price) is attempting to start a war between China and the United Kingdom that will result in him dominating worldwide news and making his global empire even bigger and more powerful.

Things get a bit more complicated for Bond when he learns Carver has married his former flame Paris (Teri Hatcher) and they have quite a bit of unresolved business between them. Along for the adventure is Wai Lin (Michelle Yeoh), a Chinese agent who teams up with Bond to stop Carver as they desperately try to prevent their countries from going to war for the sake of his twisted plan. 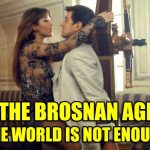 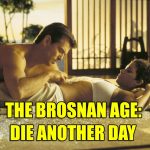