Roy Scheider stars as Murphy a maverick cop (those were the only ones around in the 1980’s) who is enlisted to test a new state of the art helicopter by the name of Blue Thunder. As with most new hi-tech weaponry there’s a pack of sinister bad guys who are looking to exploit it for their own uses. Murphy stumbles onto their plot and has to stop them, ironically with the use of Blue Thunder.

Directed by John Badham Blue Thunder is a fondly remembered film from those who saw it originally back in the early 80’s. It was an example of what a big exciting action film was back in the day. It eventually spawned a short-lived TV series and was the inspiration for the Jan Michael-Vincent television show Air Wolf. So Blue Thunder did leave a mark, but is the film any good?

Rewatching it I found it….ok. It’s a very cliché-heavy film that has some decent action and performances. As I said there’s the ‘maverick’ cop with the strained personal relationships. Candy Clark is Murphys put upon main squeeze who has to endure his renegade habits and accept she’s with a guy who is fighting some demons. Murphy is haunted by memories of his Vietnam experiences and an old foe from back then played by Malcolm McDowell, who naturally shows back up as Blue Thunder’s pilot and is the movies bad guy. There’s also Daniel Stern’s naive rookie cop, who has to get a crash course in aerial police work by Murphy.

And no cop/action movie is complete without the loud, unhappy, strict boss who has to consistently chew Murphy out for his behavior. Warren Oates has a few funny lines and he fulfills his duties in the required role decently enough.

All of that is a pretty by-the-numbers cop movie. The thing that distinguishes Blue Thunder from the crop is the helicopter.

Blue Thunder is really the star of this. The whole time you’re waiting for its appearance. Today it might not exactly look as ominous and hi-tech as it did back in ’83, but it does still look really cool. The final aerial battle between Murphy and McDowell is pretty good. There are lots of nifty copter shots, explosions in the city, citizens running for cover. I wish we got more of that. I know Blue Thunder has its fair share of hardcore fans, but I’ve never been a member of that group. For me, it’s not a bad film, some of the actors and action are entertaining enough to hold my interest, but it averages out to be just an adequate movie for my taste. It was really never one of my favorites back then or now.

I’ve heard plans for a remake of Blue Thunder have been discussed for years. Last I heard they were going to swap the helicopter with drones. That doesn’t sound too appealing. I’m not sure if kids would be as wowed by drones compared to a futuristic fully-armed black helicopter. But there’s still no sign of that remake yet. 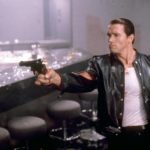