Phone the neighbors! Wake the kids! David Letterman is leaving the airwaves!

I used to love late night television. Before there were thousands of channels at my disposal I was still enjoying the final years of the late night talk shows before there was the internet, Youtube and the ability to see funny clips with a press of your mouse. I remember when there were merely the three major networks, Fox was trying to establish itself as an actual channel and there was only a handful of cable stations to choose from that were showing some lame ass movie.

Late night television used to be so exciting. I still maintain that the best lineup of talk shows was The Tonight Show with Johnny Carson, Late Night with David Letterman and if you could manage to stay up for it Later with Bob Costas.

Carson was always pretty funny, but it was Letterman who was always my favorite. His show seemed like a such a contrast from Carson’s big rainbow curtained extravaganza. Tiny little studio with goofy sound effects, wacky stunts, weird filmed bits, some stars mixed in with an odd assortment of guests that seemed like they would be an attraction at some circus tent on the side of the road.

Rewatching old clips of that period of Late Night I really start to miss it.

I still remember laughing hysterically at him answering viewer mail. Or how he would use the NBC building as a playground. Or how about when he went to the GE offices to give them a fruit basket as a sign of friendship after they bought NBC and they threw him out the door! Getting Teri Garr in a shower. Kamar the Discount Magician. Kid inventions. Visits with Meg in the building across the street. Crushing stuff. Velcro and Rice Krispy suits. The Monkey-Cam. All those random on the street interviews where he would just bother people and ordinary, unsuspecting New Yorkers becoming the funniest people on television. Man, some of that stuff was so funny. Watching some of those older clips still makes me laugh. It was back when no one knew who this guy was or that there was a show at 12:30. It was like Late Night would do all this crazy stuff and it seemed NBC either had no idea it was happening or that they didn’t care since they figured no one was watching anyway.

It also reminds me how special I thought Letterman was back then. Nowadays you can find these kind of bits all over the place, but at the time the only place that we got to see this kind of nutty stuff was after midnight on NBC and it made me a devoted fan of Letterman’s.

I was fortunate enough to get to see a taping of Late Night with Letterman. A friend and I mailed away for tickets (you had to use the old fashioned postal system back then – no such thing as email) and scored them.

We skipped school, ventured into New York City and got to NBC studios. We were hours ahead of anyone else and we stood there bubbling with excitement. While waiting in the front of the line we got a clue of who the guests for the show were going to be when Kirk Douglas and Helen Hunt walked past us onto the elevator to go up to Dave’s studio. To this day I regret not being an annoying fan and trying to get Douglas’ autograph.

Since being the first ones in line we got the front row and Letterman came out as he always did to talk to the audience before the taping. I remember my friend being ecstatic that there was our favorite talk show host standing right in front of us telling jokes. “He was so close we could have spit on him” he said. Of course we didn’t though.

That was my first realization television can really make a set look much bigger than it actually is. Man, was that studio small! A complete contrast was getting to see Dave in one of the biggest theaters around for a much bigger and more special event. In 1992 a bunch of my friends and I got tickets to Late Night’s tenth anniversary show that was being held at Radio City Music Hall.

That day we ventured into the city on a cold January day as early as we could to get the best seats possible and ended up in the front row again. What a great time that was. It was mainly a clip show with a few guests popping in and Bob Dylan performing. The high point was seeing Bill Murray coming out on stage to trade some jokes with Dave. It doesn’t get much better than that!

When Carson finally retired in 1993, Jay Leno became his Tonight Show replacement and Letterman was ready to jump ship over to CBS it was a different Letterman from then on. He was getting older, he was doing a show in the more ‘prestigious’ time-slot of 11:30 and I guess all the silliness he got away with on Late Night wasn’t thought would translate to the wider audience.

By the way, remember how around that time we saw all these challengers who were trying to win the title King of Late Night – Pat Sajak, Joan Rivers, Chevy Chase, Arsenio Hall, Magic Johnson. What a fun mess all that was. I think if you just had a name with some letters in it you were given a talk show.

The Late Show with David Letterman started. I never really thought of Late Night and the Late Show as two separate shows. It just felt like a continuation of Dave’s show. It was basically the same talk show format only it was now on another network and on a little earlier.

I tuned in at the beginning and honestly after awhile I watched less and less until I stopped watching it altogether. I wished that Letterman never went to 11:30. I still thought Letterman was funny, I still liked him and he would do some funny stuff now and then, (I loved the taking Siskel and Ebert door to door bit) but the show was never as good as the highs I experienced during his Late Night years.

The Late Show felt more ‘show biz-y’. Late Night was grittier, less polished. It came across as a show an uptight network would be embarrassed to air to a wide audience. That’s the golden years of Letterman for me. Back then he’d interact with more regular folks on the street, offbeat guests would be given airtime, shaky cameras were just trying to keep up with the antics and asinine bits would fill up the program. That’s the show I wore the t-shirt of in school, the show that got me to buy those Top Ten list books and the one when I was able to stay up to watch was excited to see what he was going to do.

Although, I do regret not getting a chance to see him at the Ed Sullivan Theater at least once. I came close. I happened to be in the city one day, was walking past the theater right before a show was starting and decided to wait in the standby line to try to get in. I was really hoping to too when I found out Tom Hanks was the guest, but alas it wasn’t meant to be.

Letterman’s last show I’ll definitely be watching just to see him off. Not surprisingly Bill Murray showed up as his last guest on Dave’s second to last show (he was after all Letterman’s first guest on Late Night), along with Bob Dylan once again to perform. Kind of a strange feeling since they were both there when I saw that anniversary show twenty-three years ago! And I imagine the final show will much like that anniversary show I saw – it will have some surprise guests popping in and mainly be a clip show featuring highlights through the years.

I’m betting we won’t be seeing Letterman much at all anymore. I always thought he would do what Carson did and just stay away from the spotlight once he retires.

I don’t watch talk shows anymore and now with Letterman leaving the air there are no hosts left that I have any affection for or nostalgic attachment to. Dave’s final show could possibly be the last time I’ll be motivated to watch a talk show. Probably the most I’ll be seeing of talk shows now are short clips that are trending for the day. I doubt most of them will be as funny as the vintage stuff Letterman did though.

Siskel, Ebert and Dave spend an afternoon in New Jersey 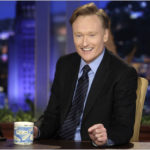