People would have been talking about Guardians of the Galaxy no matter what.

Whether it was good or bad, whether it bombed or was a huge hit, if it got blasted by the critics or loved by them – it really didn’t matter. It’s a Marvel movie and Marvel is on such a roll and has so many fans excited to see them further expanding their cinematic universe with each subsequent movie that Guardians of the Galaxy was sure to invoke a reaction no matter how things played out.

After a week in release now everyone knows Guardians has been a huge hit. Audiences seem to love it, along with the critics. Have you seen the articles theorizing that Guardians’ huge box office may not just be able to save this summer, but the rest of the year?

Who would have thought that when people were walking out of the theater one of the most often remarked things about the movie would be the surprise appearance of Howard the Duck in the after credits scene (who is voiced by Seth Green). I bet no on would have predicted that when this movie was first announced two years ago! By the way, this Howard certainly didn’t look as soft and cuddly as the one from 1986. Any female/duck sexplay would look even stranger with this Howard!

It’s been amusing hearing the reactions that final scene has gotten. There has been plenty of tweets and articles theorizing what the significance of getting the confirmation that Howard the Duck officially lives in the same universe as Chris Evans’ Captain America, Robert Downey Jr.’s Tony Stark and Sam Jackson’s Nick Fury. That’s a pretty wild thought! So will we possibly be seeing more of Howard in future films?

This appearance was especially fun for me since last fall I had completed a Howard the Duck review of the notorious ’86 film for my superhero series. The George Lucas produced big-budget bomb has been the way most audiences have been familiar with him.

One of the things that came from the research I had done for that review was reading all the original Howard the Duck comics by Steve Gerber – and really enjoying them and that character! After reading his comic adventures you can see how lousy an adaptation the film was of Gerber’s Howard.

At a certain point during that review I stated something along the lines of how great it would be for Marvel Studios to do something with Howard the Duck. Maybe they could do some kind of project that would give the character the justice he had never gotten with that ’86 film.

So I was quite surprised when I was tipped off that Howard would be in the after-credits scene Guardians would end on. I had actually heard the rumors of it several weeks before seeing Guardians, so by the time I was in the theater opening weekend I was already anticipating to see him.

I held back writing anything about this not wanting to spoil it for anyone who might have potentially read my nutty blog. But since the movie has been out for a week now and everyone is talking about Howard it doesn’t seem like much to spoil now.

Now this raises the question – what’s next for Howard? Since the after-credits scenes in previous Marvel movies have always been a precursor and indicator to what’s going to come next in its cinematic universe, should we expect to see him make a comeback and a few years from now witness a new Howard the Duck movie?

I highly doubt it.

Not to rain on anyone’s duck parade, but I don’t see Howard headlining his own movie again. At the most I would predict that perhaps Howard would show up in a small supporting role in a Guardians sequel. Maybe appear as some kind of connection that will give the Guardians some info or something. One scene, maybe two and that’s it. Or I could see him showing up in one of those short Marvel one-shots that appear on a dvd extra. Or possibly some kind of animated outing, but as for his own big-screen adventure, I’d be shocked to see that ever announced.

The best thing to come of this bizarre resurgence Howard is getting is that Marvel is re-releasing the Howard the Duck Ominbus in October. Older fans and newcomers will get the opportunity to see what all the fuss is about over Gerber and co-creator Val Mayerik’s Duckworld inhabitant. It’s going to include all of the essential Howard stories from his history. That alone is a pretty sweet deal for one of the oddest characters that reside at Marvel.

As for people speculating over some huge exposure that Howard will be getting on movie screens, I think they’re being overly-optimistic. I think this cameo was just a fun goofy one-shot joke. 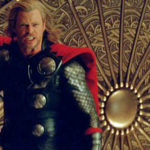