Word is spreading that Captain America will be hitting the big screen in the form of actor Chris Evans.

Evans will play the role of Steve Rogers/Captain America in at least three Cap films, the first titled ‘The First Avenger: Captain America’, scheduled for release on July 33, 2011. From there he will move onto the epic ensemble film ‘The Avengers’ scheduled for May, 4, 2012.

First, you have to admire Marvel’s embracing the surge of comic-book themed-characters hitting film screens. They certainly haven’t been dragging their feet in regards to meeting the demands of fanboys craving to see beloved Marvel characters hitting the big screen.

Countless comic characters have gotten or are planned to get their due. This rush of proposed films is a double-edged sword however.

Yes, we’re getting to see a lot of favorite superheroes in big-screen adventures, but is it worth it if the films quality suffer because of this rush and are uninspired? And what if all the buildup to the Avengers film was for nothing? What if it is a huge embarrassing disappointment? There’s the potential that it could be the biggest superhero cinematic letdown for sometime. If so, fans will be raging about it for years.

As of now, with Captain America coming he will be the biggest Marvel superhero since Spider-Man to get the big budget treatment. The casting of Steve Rogers seems to be one of the most difficult superhero roles to get right. It’s comparable to Superman in a way. If the audience can’t accept that this guy is the ideal American super soldier who stands up for truth, justice and all that, the whole thing will come off as forced and insincere. It will just be another addition to a silly action film with a costumed hero in it.

Ironically, Evans is best-known for his performance as the Human Torch in the two Fantastic Four films. He didn’t exactly set me on fire from his portrayal and he just faded into memory, along with those films. I did like how he was the one character who was excited about receiving his powers and embraced them, but that was about it.

He does have a good look for Cap. Physically he looks the part. He looks like he could kick some ass and he has that ‘American Hero’-look. I haven’t really seen him in anything else, so if he’s up to the acting challenge we’ll have to wait and see. He’ll be facing off against Hugo Weaving who will be playing the Red Skull.

I’m not sure how believable it will be to see a guy running around in Cap’s classic costume, throwing his shield, defeating bad guys. The patriotism that Cap stands for might come off more eye-rolling and silly than it was when he first showed up in WWII. Yet, I do have hope.

Superheroes are much more respected than they used to be and filmmakers seem to want to treat them as seriously as possible, so I predict great pains will be taken to make Captain America’s return to movie screens as rewarding as possible.

We’ll have to see whether the film will be more of a Dark Knight experience or a Daredevil one. 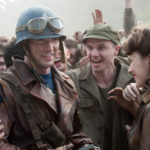