Roller-derby skater K.C. Carr (Raquel Welch) has just got traded from her team in Kansas City Missouri to Portland Oregon. Now a Portland Logger K.C. not only is taking hits and falls on the track, but she’s finding drama at every turn off of it as well.

She faces animosity by Jackie Burdette (Helena Kallianiotes) who was the star Logger and is now threatened by K.C.’s popularity. Logger owner Burt Henry (Kevin McCarthy) has more than a business interest in K.C. and as they begin to date he begins to show a more ruthless side. Plus, way back in Kansas City K.C.’s two children are missing their mom. Oh what a star roller-derby lady has to contend with!

Kansas City Bomber was the combining of two timely popular things of the period – the sexiest leading lady of the era and the fad of roller-derby that had gripped the country.

While you probably wouldn’t expect a sports classic out of this, the union does sounds like it could be an entertaining Welch vehicle. You know, something of a guilty pleasure movie.

Make no mistake Welch looks great – as expected, but the rest of the film is a dud. Even the roller skating scenes that are meant to generate excitement fail to impress. I wasn’t expecting the Raging Bull of roller derby movies with the camera swooping all over the track making us feel the pain of the players. But other than a few falls the rolling scenes are pretty static. There’s nothing that really distinguishes one night of skating from another.

I never really watched any kind of roller-derby comps, but it took me awhile to get a general idea of what was going on, It was kinda strange that a movie about the sport of roller-derby, it never clearly establishes what the objectives the players are trying to accomplish skating around that rink from the outset or clarifies how points are being scored.

But maybe the real allure of roller derby for the rowdy crowds is just to see the fighting and falls. Sorta like wrestling on wheels. The skate-less drama is pretty dull as well. There’s not much to get invested in. The rivalry between K.C. and Jackie doesn’t quite add very much to the story. It’s very routine and feels forced.

At the end with the big race between the two with the stakes being that the loser leaves town I could of cared less. It’s kind of funny how abruptly the movie ends after that too. When the music came up and the credits rolled I muttered, “That’s it???”.

The best part – apart from gawking at Raquel – is McCarthy. I always love watching him and he plays a bit of a sleazeball owner. He’s so good at putting a big phony smile on his face and saying things with the least bit of sincerity.

After he trades K.C.’s friend he admits he was jealous of the time away K.C. was spending with her confessing he wants her all to himself. “Is that so wrong?”

See, granted he did something bad and rationalizes his reasons for doing it by saying he missed her….well doesn’t that just tug at your heart and make you want to say, “Ooooh that’s ok”.

You know the guy can’t be trusted, but he’s so oily smooth with his arguments and delivery I enjoy watching him. Unfortunately, McCarthy doesn’t really get to be a full blown evil owner though.

It felt strange watching this since it plays as almost as if it’s a general outline of the story they were planning on telling. Nothing is developed enough to make us care about it. It’s like they had all the broad strokes of plotlines and characters in place, but just decided not to fill them in or do any detail work on them. Maybe they thought Raquel on skates was enough. 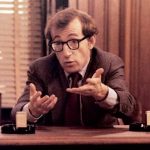