The cop buddy genre got countless entries during its peak years in the 1980s. By the end of the decade the formula was running on fumes, the novelty of mismatched partners had been mostly exhausted and the blueprint had become tired and lazy that would try to desperately wring a few final gasps of comedic excitement from the drained concept. The highs of watching mismatched partners annoying each other while getting into ‘shoot ’em up/car chasing’ action was over.

Cue Loose Cannons, a dismal, embarrassing cop buddy comedy that despite having quite a good cast, was deservedly ignored, quickly forgotten and buried in the trash heap of the genre (somewhat literally too, as I’ll get to). I imagine everyone involved wouldn’t put up much resistance if they could just blot it out of existence.

Gene Hackman is a veteran Washington D.C. cop. Ok, so he needs a partner right? That’s where Dan Aykroyd comes in as younger, more novice cop. But there has to be more of a gimmick between the two. So, while Aykroyd is a brilliant detective who can amazingly piece together crime scenes like a modern day Sherlock Holmes, he also is a bit unbalanced. Aykroyd has a mental condition when he’s placed under extreme stress he blacks out and adopts the personalities of a catalog of pop culture figures. Everyone from Captain Kirk to the Cowardly Lion to The Lone Ranger to Tweety Bird might show up via Aykroyd at the worst possible moments! This drives Hackman crazy and is meant to give the audience some great guffaws of laughter during exciting action portions of the movie.

It’s junk. It’s quite the train wreck of a movie. And it’s not like there isn’t any talent involved. Along with Hackman and Aykroyd, it’s directed by Bob Clark (Black Christmas and A Christmas Story). One of the writers is the prolific Richard Matheson. It would be reasonable to think some kind of entertainment would come out of all them working together. Instead, the movie plays like a jumbled concoction of ideas from better movies without any flair or enthusiasm put into it. From the first scene you know this is going to be a rocky haul. Hackman with partner David Allan Grier, respond to a noise complaint of a couple having sex too loud. Hackman knocks on the door and threatens to arrest them for having sex without a condom. He decides to just give them a warning.

Oh it’s painfully unfunny and doesn’t get any better from there.

I’m really hard pressed to come up with positives for Loose Cannons. I suppose I could say, I always thought Hackman looked pretty cool in his Washington Redskins jacket. And his vintage station wagon is awfully nice. It’s his most prized possession, so not surprisingly it has to get demolished for the sake comedy during a really dull car chase.

That’s one thing about the car chases in Loose Cannons, they are extremely lame. At times it looks like the cars are going about 30mph. I don’t know what it is. I guess it was the way some of the parts of the chases were shot and edited together, but they don’t look pedal to the medal white knuckle rides.

Are there any good action set pieces to speak of…..not really. It’s all pretty by-the-numbers shoot outs and car chases. At a point things look to open up on a train as our heroes get attacked by incoming bad guys, but it doesn’t result in anything special.

It all, looks like it must of cost a decent chunk of change to film a lot of this stuff, but it ends up a boring waste of time. I completely forget that Ronny Cox and Nancy Travis are in it this. They do some…stuff in the movie. I forget what though. Aykoyd is a talented guy, but his schtick of impressions get increasingly more and more annoying. It’s supposed to be funny that Aykroyd will take out bad guys while he thinks he’s the Road Runner. It gets tiresome, not inventive. It’s even more embarrassing when they try to insert some seriousness into his disorder, thus bonding these new partners friendship. It’s so forced and awkward you can’t take it even a smidgen seriously.

Hackman for his duties is meant to stare, yell and mutter when Aykroyd is going into his bits. He and DeLuise exchange looks and one will say, “He’s doing Butch Cassidy and the Sundance Kid.”, “You’re not Captain Kirk!”, “No not warp speed!”.  I think this is meant to clue us in on the references and people Aykroyd is imitating in case anyone was confused. So, Hackman gets to provide the commentary.

While watching Loose Cannons, the strangest thing to me is how Hackman got involved in it. It’s a very uninteresting part and he doesn’t have anything to do. He isn’t able to bring anything unique or special to this other than his natural charisma, but that’s not enough to make the film bearable. He doesn’t play much of a character and it’s such a generic cop role the part could have been filled by anyone and the results would have been the same. You might even think Hackman would take the opportunity of being in a cop/buddy comedy to poke some fun at his gritty Popeye Doyle role in The French Connection or something! Nope.

I suppose Hackman just had a window of time, nothing better to do, it was a quick payday and boom he arrived on set. Loose Cannons has got to rank as one of the worst films he had done.

Aykoryd on the other hand I fully expect to be in something like this. He’s no stranger in starring in junk. In fact, Loose Cannons can be viewed now as the first sign of where a lot of his film choices were headed there on out. Nothing But Trouble, Coneheads, Exit To Eden, Getting Away With Murder. Loose Cannons just looks like another low on Aykroyd’s resume.

Filmed in 1988, but not released until 1990 Loose Cannons fits that perfect old joke – ‘That film wasn’t released, it escaped!’ Maybe it all seemed like a good idea when they came up with the premise – “A cop with multiple personality disorder driving his serious partner crazy! Audiences will love it!”. Well, no one did. Loose Cannons bombed badly at the box office and the reviews were not kind to it.

An interesting note about Loose Cannons was originally J.T. Walsh was cast in the film. He worked two days until being fired, supposedly at Aykroyd’s insistence. Walsh had appeared as Bob Woodward in the notorious and controversial 1989 bio flick Wired, about the life and death of John Belushi.

Aykroyd was adamant about his disapproval of the film and the disrespectful depiction of his late friend. I guess, he wasn’t eager to work alongside an actor who was part of a film that Aykroyd felt was “unforgivablele”.

Walsh was let go from Loose Cannons and replaced by Paul Koslo . Both Walsh and Aykroyd never commented on the incident, but co-producer Alan Greisman only said Walsh’s casting just “didn’t work out”. This is the perfect place to end on an amusing 2013 postscript Loose Cannons had. Somehow an image of the film was found in a Canadian landfill. A worker discovered a weathered image of a man standing over a dead body.

Thinking it was part of a genuine snuff film and evidence of a murder the police were called. The image was examined, the person in the frame looked similar to Aykroyd, the police contacted him and it he confirmed it was in fact an image from his 1990 film that came from the original movie reel.

Aykroyd to his credit wasn’t saddened to learn a piece of his cinematic work was found in a dump. He supposedly said the worker should have left it there where it belongs.

I wonder if Hackman feels the same way.

The trailer. It didn’t interest audiences to buy a ticket to it. 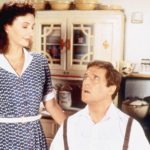 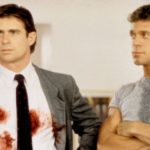