From 1987 to 1989 a strange television phenomenon occurred. A loud, raucous talk show had appeared on the horizon and riveted viewers with its chain-smoking host overseeing debates involving hot political topics and sensitive issues between yelling, passionate guests and an overbearing roaring host.

Audience members, when not acting like a crazed lynch mob, would get to step up to a podium named ‘The Loudmouth’ and voice their thoughts about the topic of the night (usually it was more like yell their thoughts). Screaming, arguing and occasionally fighting would ensue. It was part talk show part wrestling match.

The Morton Downey Jr. Show would enjoy a short-lived popularity that attracted viewers and controversy. Downey would become popular for his screaming and abrasive attitude in the midst of the chaos of this show. He was sought for interviews, released an album, made personal appearances to sold out crowds, the show even had its own board game!

It’s said it’s place in television history would be the forerunner to future tabloid talk shows like Jerry Springer and Geraldo, along with being the early signs of the reality TV craze that would follow years later. Alas all good things must come to an end and The Morton Downey Jr. Show disappeared as fast as it arrived, in part to a very strange publicity stunt by Mr. Downey.

It’s now become one of those shows that those who were around at the time remember vividly, but probably anyone under the age of thirty have never even heard of. Evocateur: The Morton Downey Jr. Movie attempts to remind everyone of it and recount how it came to be.

The film itself is a fairly straight-forward ‘talking head/clip’-type of documentary. Interviews with those associated with the show, the fans who followed it and other talk show hosts discuss its influence on them and on television.

Of course we get some interesting behind-the-scenes tales of how it came to be and the controversy and popularity that erupted from it. We revisit some of the “pablum puking” guests who were willing to venture out onto that stage who know full well they would be drastically outnumbered by Mort and his followers.

I didn’t know much about Downey other than his stint with this show so learning about his upbringing, feeling the shadow of his famous singer father hanging over him, his own attempt at a singing career and his drifting in show biz until he found his calling by being center stage of a loud circus was enlightening. For me Downey was always just born out of this show. I had no idea where he came from or anything about his past. Simply learning about his family life and political leanings before becoming television’s Loudmouth was itself eye-opening.

Along with clips of the show and interviews, the doc uses this strange, rough-type of abstract animation to help illustrate passages in the film. They work fairly well. I felt the actual file footage from newsbroadcasts, photographs and clips of the show were much more fun to watch. It was necessary to fill in the gaps some other ways, so I guess the animated portions are effective in illustrating incidents, although I did think they sometimes become a bit strange.

It’s Mort’s show that is the main focus and well it should be. And it was entertaining to see older fans talk about their passion for this wacky show. It seems everyone knew just what it was and no one is claiming it was sophisticated television. How much of the show was an act and how much of it was genuine? There were always suspicions about how staged it was and if Downey purposely provoked whether he believed what he was saying or not.

If there was ever any doubt of this Downey cast enough suspicion on his television persona in his infamous alleged ‘airport bathroom skinhead attack’ that would cement the demise of his reign on the trash talk show heap. That incident not only made people really question Downey, but also helped end the show.

I have a personal connection to The Morton Downey Jr. Show. The show was filmed in Secaucus, NJ and was aired locally in the tri-state area before being syndicated nationally. So I knew of the show before the rest of America caught on. At the time I was fascinated by it and just enjoyed seeing people yell at each other. Hey, it was funny!

Me and some friends ventured to one of his shows in an attempt to experience the mayhem firsthand. Our skinny, gawky selves had to lie about our ages to be allowed in, but we managed to get into one of the shows and whooped and screamed for the following sixty minutes. We had no idea what we were screaming about, really had no ideas or opinions about the issues at hand, but we were having a blast chanting “Mort! Mort! Mort!”. I remember between commercial breaks Mort chatting with people and looking in our direction asking us where we from. When we told him he knew of our small little town, which we were really jazzed about. ‘Morton Downey Jr. knows where we live!”.

My two friends got up to the Loudmouth and got to yell their adolescent opinions. They had no idea what they were talking about, they just wanted to get on TV and scream. After our Mort adventure we wrote an article for the school paper to share with our classmates of that historic trip. We enjoyed the envy they had of us of being audience members of The Morton Downey Jr. show! This triumph didn’t help us score with any girls in school unfortunately.

For me personally I had fun revisiting Mort and learning more about him and the show than I had ever known before. After the show disappeared the only other time I recall seeing Mort was in a small role in Predator 2 and then the news when got lung cancer and soon after died. Sometimes I would think Mort was a television fad that everyone had forgotten about it. It’s an interesting exploration of how this cheap, little, controversial, loud talk show captured America’s attention for a time. Seeing clips of it again I was reminded just how bargain-basement that show was! It was unquestionably trashy, but it was unique entertainment for those two short years.

So if you decide to check out Evocateur: The Morton Downey Jr. Movie and you see the outrageous clips of the old shows with a hollering, out of control audience and are left asking yourself – “What’s up with this audience he had? Where did they find these people? Who are these nuts?”. Well, for at least one show yours truly was one of them. 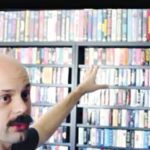