Bruce Willis is a private detective in Venice Beach. His dog gets stolen and he sets out to get back his lovable mutt. Along the way he encounters an eclectic cast, oddball characters and a series of convoluted tasks in this action comedy.

Once Upon A Time In Venice is not a good movie. It’s a pretty lazy, unfunny and unexciting yarn that had I expected something more from it, I would have felt pissed that I wasted my time on it. BUT I didn’t expect anything worthwhile from it and it delivered on that.

For those hoping for some old school Willis action they’ll be disappointed. Written and directed by Mark and Robb Cullen, it’s more comedic than action – or at least tries to be comedic. Sure there’s some action bits in it, but they’re kind of pushed to the background. The focus mainly stays on stale jokes and an offbeat tone with wacky characters. It really doesn’t work.

I’m not sure if Once Upon A Time In Venice was written before John Wick with the hero’s dog being the lynchpin to kick off the story, but it’s hard not to draw comparisons to that element. I’d wager most reviews have made that connection, so I’ll leave it there. The odd thing about the movie is that it clocks in at around 90 minutes, but the story doesn’t really start rolling until about thirty to forty minutes in! Seriously! It was really strange. I kept waiting to see when things would start up or if any of the early stuff would play some part in the story, but it doesn’t!

Thomas Middleditch who is working for Willis goes undercover to a sex addiction meeting. A beautiful Jessica Gomes shows up as a runaway who Willis sleeps with and her big brothers chase after. Now there’s a LONG sequence of Willis skateboarding away from them naked. Further humor is added to this by Willis holding a gun between his butt cheeks. Yeah, a real laugh riot.

Willis’ pal John Goodman is going through a divorce and is losing his surf shop. Willis’ pizza guy friend convinces him to steal back his car that was taken by Jason Momoa. Don’t blink, there’s Famke Janssen playing Willis’ sister.

This by the way is all before the meat of the story starts up!

It’s just like seemingly random stuff that doesn’t connect or is funny. It’s like they didn’t have enough ideas to sustain the story for even ninety minutes and they came up with these bits to fulfill a film running time and dropped them in the beginning. When Willis’ dog does get taken things don’t get much better. Willis agrees to get Momoa’s stolen cocaine back in exchange for his pooch. Then the dog switches hands. There’s this goofy bit about an ongoing pornographic graffiti artist. A tough drag queen who puts makeup and a wig on Willis. Willis having to borrow money from loan shark Ken Davitian. Middledtich’s mission dressing as a cowboy at some Spanish bar. Then there’s even more familiar faces you’ll recognize and wonder, ‘How did they end up in this movie?’

This sound like a crazed shopping list huh? You might be wondering, ‘Well, how does this all connect into one story?’. It really doesn’t and I gave up trying to make sense of how the story was progressing. The movie almost becomes a cinematic equivalent of Mad Libs.

I guess it’s meant to be a series of escalating events that draw Willis into encountering more and more bizarre characters and situations, but it’s just so exhaustingly dull! Even this section, that doesn’t even last an hour, felt like it dragged on for twice that long! It started to feel like some kind of lame detective/cop show you’d stumble across on the USA Network. Even its cutesy title annoyed me. I guess there’s no chance they’re going to stop using variations of Sergio Leone’s ‘Once Upon A Time…’ movie title anytime soon. Probably after Tarantino’s Once Upon A Time In Hollywood comes out it will inspire even more filmmakers to do their version on that title and try to sound clever.

I know Willis has done quite a few video on demand movies in recent years. I would love to know why.

I’m sure they pay decently and it’s steady work, but are they really worth his time? He can’t be this desperate for a paycheck. I’ve only watched this one, but from what I’ve heard of the others they’re about the same quality.

These cheaper video on demand and direct to streaming movies are a great avenue for B-level actors to get featured in. In Hollywood they might not be viewed as exactly A-List anymore and older actors who’s sheen has worn off can get to work in these and be a bigger fish in this little pond, rather than struggle to land a smaller role in a big Hollywood flick. But I never considered Willis to have that problem. That’s what makes this career tract he’s on even stranger to me. He’s still starring in major Hollywood productions. He just did that Death Wish flick, he’s got the Unbreakable sequel Glass coming up, why waste his time with this stuff. It’s not like they’re challenging offbeat roles or an opportunity to work with independent promising young talent.

He basically plays the action persona he’s been known as for decades, he doesn’t have to put a lot of effort into that and looks like he’s trying to get through this as quickly and with as little enthusiasm as possible. I don’t really understand his decisions.

This is miles above when I thought it was strange that he did the voice in Look Who’s Talking all those years ago. At least that must of only been a days work and a big payday back when his movie career was still relatively new. I guess this was meant to sort of be a Tarantino/Guy Ritchie influenced type of flick. Pile in all these strange characters, tough looking folks who are talking about ‘cutesy’ things and are behaving in a comedic way and let the cast do the heavy lifting of being in a goofy crime/action/comedy. It does not work.

I’m still confused by it. The biggest moment that held my attention was Gomes taking her top off.

For Willis fans who have been hoping he’d get back into their good graces after….now a pretty long dry spell of subpar flicks, don’t look to this one for any kind of redemptive entertainment from him.

Don’t be fooled by the tantalizing cast and think, “It can’t be too bad.” You’ll be eating those words not even halfway through this flick. 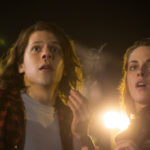