A young up-and-comer computer whiz (Liam Hemsworth) is blackmailed by a powerful tech billionaire (Gary Oldman) to spy and steal secrets from his competitor (Harrison Ford).

Needing money to care for his sick father (Richard Dreyfuss) our young hero agrees to the deal. He begins to ingratiate himself into this ritzy world. Soon however, he’s caught in between these two dueling adversaries and there’s much more at stake than money and company secrets hanging in the balance. He becomes an expendable pawn and now has to fight to survive this power struggle between these two rivals.

For a suspense/thriller this is one dull, predictable exercise in boredom. There’s nothing here. Simply nothing to make it worth watching. It’s amazing how boring this movie is. It’s almost as if they came up with a vague outline for the story and just filmed that, never taking the time to write a script or come up with anything other than a quick plot synopsis. This is based on a book and that has to have more going on in it than the movie!

The story is not at all captivating and crawls along not giving you any reason to care about the characters or their reasons for what they’re doing. It follows the blueprint of so many movies that have come before – young kid getting enticed by riches, begins working for ruthless boss, realizes he made a mistake, wants to get out, life is in danger, comes up with plan to one-up these smart manipulators. Blah, blah, blah. None of it is original or even the least bit special. Perhaps if you’ve never watched a movie or been told a story before in your entire life some of the ‘twists’ and ‘reveals’ will surprise you. But if you’re a real film aficionado having seen more than two movies in your lifetime you’ll sit stone-faced watching this one. Unless you fall asleep first.

I guess Hemsworth has somehow been able to parlay his participation from the Hunger Games films, dating Miley Cyrus and being the younger brother of Chris into his own movie career. The makers of this probably figured throw him into a lead role because he’s young, good looking and people will surely love to watch him starring in his own movie. Did anyone bring up the concern if he could actually act or not? One screen test might have tipped them off. It might have been a better idea to find someone else for this part.

He might be serviceable in smaller supporting parts or playing ‘third hot guy on the left”, but he brings nothing to the table here. He is a vacant vessel throughout the movie never being able to emote or demonstrate any onscreen charisma.

There’s a real problem when your lead in the movie, the guy who’s supposed to be scared and running for his life, leaves me not caring at all. It would have been a blessing if the bad guys caught him and put him and me out of our misery. At least then the movie would have been forced to find another character to focus on. There have been a slew of young good-looking leading men in recent years who have been headlining some major studio films. And their  talents seem to start and end with their looks and they all begin to become interchangeable. This younger Hemsworth brother fits snugly in that category. It will be interesting to see how many chances he and his abs get at more lead roles.

Amber Heard plays the daughter of Ford who Hemsworth falls for. I didn’t mind Heard last time I saw her in Drive Angry, but here she has nothing to do. She doesn’t come off as anything other than a boring tart with very little upstairs.

She doesn’t even seem to have any kind of connection to the main plot. She just comes in talks with Hemsworth a few times, they banter back and forth and have sex. And not surprisingly Hemsworth and her have absolutely no chemistry and their love scenes are incredibly stiff and routine. So I think she survives this mess of a movie the best out of anyone. She’s lucky she wasn’t given anything to do and she fades into the background. Oh and Ford and Oldman….what are you guys doing? What a casting coup this movie got. The big Air Force One reunion. Two big actors to bring to this party. They’ll really help elevate these roles. Yeah right.

If you guys wanted some easy cash – go do a commercial in Japan. At least then most of us wouldn’t have to see it! You want a juicy supporting part where the whole movie doesn’t rest on your shoulders – look harder and be more selective! You want an excuse to get together again – schedule a lunch date!

When the pair are onscreen trading dialogue there is the burning embers of some life here, but that’s sadly pushed aside for Hemsworth blankly strolling through scenes. This movie did neither of them any favors, other than landing an easy paycheck. I can’t think why they would agree to be in this flick that would at best rank as a forgotten made-for-TV movie from ten, fifteen years ago that barely anyone watched.

Just recently I watched what I thought could possibly be Cary Grant’s worst movie – Kiss Them For Me. Now after seeing Paranoia this could be the peak – or more like the bottom – for Ford in that same category. There have been some Ford flicks I’ve never seen – like I have never been geared up to watch Hollywood Homicide. But I can’t imagine anything he’s done prior to Paranoia would be this lousy. 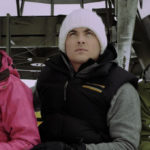 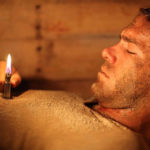