A blind photojournalist (Michelle Monaghan) is holed up in her boyfriend’s fancy penthouse. Two men enter (Michael Keaton and Barry Sloane), kill her boyfriend and demand that she tells them where her boyfriend’s hidden fortune is. She has no idea what they’re talking about, but they don’t believe her. Now it’s up to this blind woman to outsmart these two criminals and try to to get out of that penthouse alive.

I’m a bit confused with the title of this movie. When I watched it the title said Blindsided, but looking it up on the web it seems it’s more popularly known as Penthouse North. Maybe one is an international title or something. It matters very little, this is not a movie you should be rushing out to find.

It’s basically a generic home invasion movie with the similarity of the blind female lead that Wait Until Dark had, which is a much better movie than this.

The strange thing about this is that the device of a a blind woman is not really exploited. You would imagine they would think up creative ways for the blind girl to turn her handicap into an asset and turn things around on these two thugs. That would be the fun of watching the tables get turned on them. But the blind angle is practically wasted and doesn’t come to the forefront of her outsmarting these two. They could have just made her eyes work and the movie wouldn’t have been much different.

One funny thing about this is everyone comments on the beautiful view from this penthouse and it’s clearly a CGI background that’s not convincing. I chuckled everytime the characters would inadvertently point that out for me.

Monaghan and Sloane are nothing special in their roles. For me Keaton was the reason why I decided to check this out. I’ve always loved Keaton, but he’s just going through the motions here as a bad guy and sadly doesn’t make the movie worth sitting through. Whatever title you find this under pass on it. 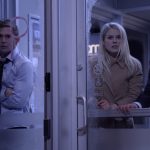