I think the Species films continued to hang around and got sequels for so long after the first in 1995, hasn’t been because it’s so much the premise or following the evolution of the initial idea through multiple movies with different approaches or more intriguing concepts to pile on it. I believe the life-force behind Species comes down to three things: gore, boobs and having a catchy sci-fi/horror sounding title.

I don’t think there’s really been that much interesting stuff done with what I always felt was a pretty light premise to begin with. Nor have they ever attempted to come up with making it any more special. The movies have settled into being uninspired B-level schlock and don’t aspire for anything more than just a basic delivery on those three components that have kept this Species train chugging along – at least until this fourth one in 2007.

That would be fine if any of them were done well, or have been goofily entertaining, but they haven’t been. I don’t view the Species films as any different from dozens of subpar forgettable sci-fi or horror films that have lined video shelves twenty years ago. I suppose I could say all the films deliver on those three key elements. If you’re wanting anything more, you best look elsewhere.

I wrote reviews of the three previous Species films and not liking any of them thought I would never watch this direct-to-video fourth. But as fate would have it (actually a cable station was running it and I didn’t have anything else to do, so I shouldn’t call it ‘fate’) I crossed paths with it.

I have to admit, the first fifteen or so minutes I was intrigued. We meet sexy college professor Miranda Hollander (Helena Mattsson). She’s living with her Uncle Tom (Ben Cross), who has been caring for her since her parents died – or so he tells Miranda. In fact, she’s this half alien species and half human who Tom and his old lab buddy created.

Miranda starts getting sick and her alien part begins to violently emerge out. The two travel to Mexico to find Tom’s old science buddy Forbes (Dominic Keating) for help. They discover Forbes isn’t the most responsible scientist. He’s been busy creating his own alien/human creations, among which is a sexy brunette species gal by the name of Azura (Marlene Favela).

The only way to save Miranda’s life is to find a human donor. A bunch of mad scientist stuff happens, the gals go full blown ‘Species’, a bunch of killing occurs, gross deadly sex happens and monster mashing finishes the story off.

I was cool with this up to around Miranda and Tom arriving in Mexico. Then things really started to get confusing and I was lost with what was going on. It’s not even worth going into, so I just watched accepting not understanding what was happening or why and my attention was momentarily captivated when the girls showed off their boobs. Kudos to that Species ingredient.

It’s another Species movie and another insipid series of scenes that amount to very little. Again, this installment doesn’t do anything more with what we’ve seen before with these sexy, dangerous alien women. They’ve updated the alien look a bit, but I never thought it looked that great anyway, so the upgrade is wasted on me. The gore bits were more CGI heavy than in past installments, so it look more cheap than thrilling. The ladies boobs looked nice at least.

Forbes looks like he might be fun being a wacky evil scientist engineering all these species creatures. He even makes money bringing pets back from the dead for customers. But that goes nowhere.

There’s even a sequence with some Species folks trying to kill Cross when he first arrives in Mexico. He gets set up by this old mystery man and ends up trying to survive these attacks. That was another confusing bit. I guess the old guy was Forbes’ friend trying to protect him, but it just seemed very random and strange. A lot of time wasted on basically species action, including Azura being dressed as a nun for some reason.

Miranda goes on the prowl after being resurrected and she does that weird killing folks with her long CGI tongue. I never fully understand the rules of the Species girls. Sometimes they look completely human, other times they look like lizards. Then in this one Azura has some makeup on her face and really bright eyes during some scenes. She kinda looks like a Star Trek alien. I don’t know what that’s meant to convey.

Really, the most promising scene is completely non-Species related, when Cross has to go out and kill an innocent person to save Miranda’s life. He ends up meeting a hooker at some club and is conflicted about what he has to do. That dilemma ends up being taken out of his hands thanks to Azura showing up and immediately killing the unsuspecting hooker.

I really don’t have much else to say about this one. The best thing I took away from it was Favela. She was quite good looking.

I can’t say the Species films have started great and have subsequently been destroyed by terrible sequels like other franchises we’ve seen. If anything the Species movies have maintained about the same level of quality from the beginning in my eyes.

Will this series continue? Well, I guess if they can get the gore, boobs and title together for another nonsensical installment why not. I’m not sure who keeps asking for more of these though. 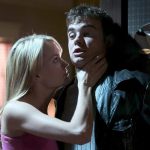