Four prostitutes (Madeleine Stowe, Mary Stuart Masterson, Andie McDowell and Drew Barrymore) have to stay ahead of the law after their leader Cody (Stowe) guns down a man in cold blood. They need a bunch of cash quickly to disappear into the sunset and hopefully start a peaceful, quiet life for themselves.

Besides a persistent pair of pursuing Pinkerton marshals on their tails, they soon encounter an old outlaw associate of Cody’s who complicates their plans and becomes a major roadblock to their freedom. Now they have to strap on their guns, fight to get their money and prove to all the dastardly cowboys that girl power is kicking in the old west!

The western genre enjoyed a bit of resurgence in the 90’s. I think that mainly came from the popularity and success of Dances with Wolves. Before that the western was practically dead on film. Oh sure, it had some sporadic moments like, Silverado, Young Guns and Lonesome Dove, but when Wolves arrived and became a surprise sensation it gave a real goose to the genre and for the first time in decades western films started to dot the cinema landscape.

So, the hook with Bad Girls was it being a feminist western with four female heroes riding horses and shooting guns. This fab four are viewed with distain by marching Christians and as the weaker sex by sneering males. With their smarts and gun-toting talents the ladies vanquish the baddies and prove girls don’t just have to be damsels in westerns. Bad Girls was almost like a dusty version of that Ghostbusters remake twenty years earlier. And ironically it’s practically the same results. Just because there’s the ‘radical’ idea of casting of women in a movie that has typically been a big boys club doesn’t automatically make it a success if everything else in the movie stinks.

There has to be something more to it, like an engaging story and interesting characters. No matter what noble intentions the filmmakers might have, the movie has to stand on its own without the gender swap trying to prop it up.

Bad Girls starts alright with Stowe killing a rough customer who’s hitting around Barrymore. The law quickly comes in and they set about to hang Stowe, whereupon her crew of ladies save her from the hangman and they hightail it out of dodge. Then things start to devolve into a bland predictable story, littered with western cliches, half-ass subplots of Cody’s past, topped off with some pretty bad acting. The fun of this premise is turning the western on its head with the female leads as rough and tumble cowgirls. Whereas, traditionally women in westerns would be wearing frilly dresses and hiding behind the bar as the men engage in showdowns, here it’s the girls taking center stage, staring down varmints and being out for vengeance on their male oppressors.

With this cast of actresses I think there was potential with this. Even the poster with their cool poses screams – you’re going to be in for some fun and excitement here partner!

I don’t even mind that the four actresses look immaculately gorgeous in every scene. Somehow dust and dirt just doesn’t stick to them! They apparently get to take regular baths off camera and wear clean clothes everyday.

They occasionally do that silly thing of having a few smears of dirt on their cheeks to illustrate they’ve been on the range. It’s almost like the make-up artists apply the dirt with as much precision as rouge. Ok, fine I’m not going to nitpick that. I’m not expecting a realistic depiction of the Old West with this, just an entertaining romp.

Even with a lackluster story, Bad Girls could have been a campy, guilty pleasure-type of movie had it had some humor sprinkled in it. A movie that you might not take completely seriously, but you’re having a heck of a good time while watching it. Nope. Everyone is wasted in this. The ladies are all one-dimensional save Stowe. Masterson is a recent widow with a conscience. MacDowell is the romantic southern bell. Barrymore is the reckless, daredevil. None of them are particularly interesting, despite each getting their own scenes where they’re meant to shine.

Stowe is the best of the lot. She shows off a toughness and believability that she can handle a gun. She’s able to keep a cool head and will shoot someone without even flinching. She has a bit of backstory where she ran with a gang and she’s already chalked up a body count in her past.

Stowe is really the baddest girl here. There really isn’t much ‘badness’ on display from them. Rewatching Bad Girls I was reminded just how gorgeous Stowe was too. I liked watching her as Cody more than any of her other partners.

It might have been better had they just made ‘Bad Girl’ starring Stowe all alone. Have her be a woman with no name that wanders into town. Just the thought of focusing on her character alone probably would have held my attention more than this group dynamic.

Despite them being on the run they’re forced to stop and deal with a bunch of pesky men-folk – Cody’s old gang partner James Russo, stranger Dermot Mulroney and his vendetta against Robert Loggia, along with farmer James Le Gros. None of it is worth going into. They should have just stuck with the women’s goal of desperately trying to escape the Pinkertons. The story drags, is not compelling and doesn’t result in any decent scenes.

And by the way, the Pinkertons in this movie have to be the worst adversaries ever! Their pursuit of the ladies is nonexistent! They’re introduced and never end up being any kind of threat to them. Their pursuit doesn’t put any added pressure on the girls. I kept asking, “Where’s the posse???” It’s really pointless. Even the shoot outs – which is what you’d think will be the thrilling high points of a western are filmed so poorly there’s no excitement to them. The editing and choreography during the gunfights are a mess. They do a lot of this slo-mo stuff and for some reason director Jonathan Kaplan consistently puts cumbersome objects in the foreground so it’s impossible to appreciate any little work that went into them.

There’s no flair to anything. Based on the cast and the cool poses they have on that movie poster you’d expect to be in for at least a little bit of excitement and fun.

There’s never satisfying scenes that make you want to yell, “You go Girl!” either.

I had read that Bad Girls was originally to have been directed by Tamara Davis, with her wanting it to be a much more of a revisionist take on westerns and the roles of women. One scene that worried the studio was one of the ladies biting the penis off some poor slob. It was going to be a much more hardcore tale about women empowerment.

Instead Fox Studios got scared by the raw feminist message Davis was planning. They replaced Davis with Kaplan two weeks before shooting. The script was hurriedly rewritten to make it more mainstream, it resulted in a disappointing movie and ended up being quite the notable flop in 1994.

I would have rather seen Davis’ movie. At least it sounded like she had a clear perspective of what she wanted to do with this story.

The trailer is pretty funny. They try so hard to make this look exciting and with the legendary voice of Don LaFontaine narrating, the trailer ends up being more entertaining than the movie. Based on this it’s no wonder Bad Girls bombed. 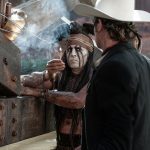 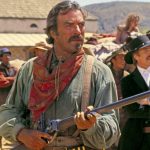