I’ve enjoyed doing these comparative looks at an original film and its subsequent remake. With vampires enjoying a high level of popularity in recent years, it seemed inevitable the 1985 vampire film Fright Night would get an update – and so it did in 2011.

Fright Night tells the story of small town teenager Charley Brewster (William Ragsdale) who discovers his next door neighbor is a vampire, but can’ seem to convince anyone that this guy is a real life bloodsucker. Go figure.

Writer/director Tom Holland attempted to give his 1985 film equal parts scares and laughs in this suburban tale of this teen Charley facing the vampire next door – Jerry (Chris Sarandon). Much of the comedy came thanks to Roddy McDowall’s horror television host Peter Vincent who gets recruited by Charlie to kill Jerry and use all his tricks of the trade he’s learned through his horror resume.

In 2011 Fright Night got its remake. The story gets a setting change to a small community outside of Las Vegas. Anton Yelchin, Colin Farrell and David Tennant are the new Charley, Jerry and Peter.

I take a look at both versions of the telling of this horror/comedy and see how they stack up to one another. 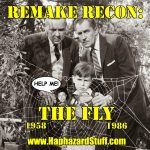