Holed up at a summer beach house for a family getaway, my sisters decided they would choose what everyone would watch for a movie night. I was overruled with my choice. How can anyone not want to watch Jaws again??? Especially hanging out right by the ocean!

So they pulled out a flick that was to be more to their liking. Not surprisingly it was one of the current ‘rom-coms’. I should have known.

‘Rom-coms’. I always hated that cutesy, hip genre name. When I first heard it I thought the movie it was used to describe had to involve a computer somewhere in the story!

Who came up with this word? I just think of the word ‘Rom-com’ as another example of how society keeps shortening the language. As if it takes too much energy to utter longer syllables so they have to condense things to make it easier to eek out. Maybe this is also due to make things easier to text possibly? Pretty soon everyone will be abbreviating every word and just grunting at each other. So I don’t use that term. I’ll stick with the old-fashioned identification – ‘romantic comedy’.

She’s Out of My League is not a very good one.

I liked the setup Kirk (Jay Baruchel) is in the middle of his monotonous job doing security at Pittsburgh airport when he spots Molly (Alice Eve). Completely blown way by this gorgeous creature slo-moing her way through the crowd he inadvertently ends up with her cell phone. She needs it back, they meet up and to his shock she actually likes him!

From there the story is exactly what the title suggests. This average looking joe with no self-esteem stresses himself out by trying to live up to the expectations of trying to keep this beauty interested in him. Naturally his wacky pals offer advice as to how Kirk can keep Molly and the idea that the difference of being a five and ten is too great an obstacle and this relationship is doomed.

This sounds like an ideal premise for a ‘date movie’. Average guys should enjoy the underdog story and feel inspired that they too can land a ten. Chicks will like to think that they along with Molly aren’t superficial and are after more than just good looks and money in their mates.

Unfortunately, the movie starts to lose steam a quarter way through. I was actually enjoying this with Kirk and Molly’s first few meetings and the awkwardness Kirk is trying to overcome. Their date at a restaurant involves him being mistaken for a waiter and a run-in with one of ex’s. Things started to seem like it was headed for a nice little comedy of these two polar opposites getting to know each other.

It wasn’t hysterical, just nice and simple. Then the raunchy, juvenile humor starts seeping in and it does the movie no favors. I guess nowadays when you make a comedy you have to attempt to make it edgy and apparently the only way to do that is to include gags with blows to the groin, pubic shaving and premature ejaculation. Yeah, there’s a lot of genital gags here.

I wouldn’t have a problem with that stuff if it was funny, but here I wasn’t laughing. Most of them don’t really offer a huge payoff. The movie tries to balance this love story with that American Pie/Something About Mary/loud/outrageous comedy bits, but those just kind of begin and just peter out and don’t amount to much of anything. The theories about the numbers based on peoples looks from Kirk’s pals isn’t particularly funny or insightful. There’s a slight allusion as to how the rankings of what makes someone ‘a ten’ are all subjective from one individual to another, but it’s quickly glossed over. That would have been interesting to see explored a bit more throughout the movie and added a bit more weight to the story.

The scenes with Kirk’s embarrassing ‘strange’ family plays as over-the-top and cartoonish and there’s not much funny there. Of course Molly’s family are all very straight-laced and serious. It might have been more amusing to have reversed that expected family tree with each of them.

And Kirk and Molly never really become people I get to know much about. Both Baruchel and Eve are likable (Eve really started to resemble Reese Witherspoon to me after awhile), but they never become more than just being ‘a five’ and ‘a ten’.

I kept waiting to learn more about them and start to see a growing connection between each other, but that’s rushed thorough with some very cliched montages of them spending time together all around town with a catchy song playing on the soundtrack. Oh talking about clichéd….the airport finale is pretty eye-rolling.

Other than the two stars who I liked for awhile and the premise that seemed like it would have had a wealth of things to explore and could have been a much meatier type of comedy, She’s Out of My League was not very good.

I would say I was disappointed, but I really wasn’t expecting much when this movie began. I’ve really started to give up on romantic comedies. I’m confident one day someone will come along and make a great romantic comedy again. It will be so good it will put all these ‘Rom-coms’ to shame. 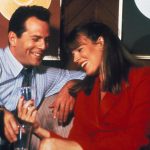