It’s become so easy to stir the pot under movie fans feet. All you have to do is announce the casting of a new actor who will be playing a much beloved character.

Inevitably, you’re going to get a wave of opinions, arguments, wallowing, enthusiasm, protests and support coming from all directions. Heck, it’s better than folks just shrugging their shoulders and saying, “whatever”.

This was the case when Warner Brothers made the official announcement that Ben Affleck has signed to play the newest incarnation of the Caped Crusader in the already highly anticipated Man of Steel sequel which will co-star Batman.

There’s still no word on what they’re going to call it – Batman vs Superman, Superman vs Batman, maybe Man of Steel 2 with the subtitle Bats Meets Supes or something. They don’t even need to give it a name. Just throw the logo up on the screen and fans will figure it out.

From what I’ve heard Affleck’s casting has had a very mixed reaction. Despite him directing and starring in the recent Best Picture winner Argo last year, a lot of Affleck’s past tabloid fodder with Jennifer Lopez still overshadows people’s opinion about him.

His ‘bro-mance’ with Matt Damon naturally sparked comments of him being cast as Robin – I think they were just trying to be funny and going for an easy joke. Then we have Affleck’s previous horrible superhero film Daredevil, that only ended somehow sparking an even more horrible spin-off film with Elektra. Along with memories of some equally horrible films he starred in during the heights of his ‘Beniffer’ fame with Jennifer Lopez. Everyone was sick of reading about those two! There’s been enough to raise eyebrows at him being the Dark Knight.

When I heard of Affleck’s casting as Batman I just thought it seemed….predictable. I wasn’t really that surprised by it.

I did think they might have gone with someone younger in order to keep him around for awhile to play the role in the expected sequels. Unless Warners and Zack Snyder aren’t thinking that far ahead. Some of the Marvel heroes have contracts for such multiple films they’re locked up to play their characters for a decade!

I don’t have much of a problem with Affleck as other fans seem to. He’s been the ‘over-exposed, young hot Hollywood actor’ who was a mainstay in the tabloids at a point, but that was a long time ago.

Since then along with this work on Argo, he’s done some smaller, more personal films. Now that Affleck has become a respected director the idea could be that he can be an easy goto to helm a planned Bat-flick at some point.

It’s still so early, so it’s impossible to determine how Affleck will do as Batman. I highly doubt any attempts by fans writing petitions, tweeting and boycotting this decision will change anything. They’ve made their voices heard, but this Bat-train has left the platform.

So I’m going to just hope for the best and try to forget all about Pearl Harbor, Paycheck, Forces of Nature, Gigli and all the crap that came before in Affleck’s career. I’ll do my best to stay optimistic. I still never got to see Man of Steel and see how Cavill is as Superman!

There’s still two long years before we ever see this movie. So there will be plenty of news and announcements until then that will keep fans gossiping and theorizing as to how this Batman/Superman movie will turn out. They’ll drop us a little crumb every now and then to keep the anticipation wheel turning with fans until 2015. The movie no doubt will open huge – could it possibly be the biggest movie opening ever? It should be one of the biggest summers on record with a lot of fan targeted movies vying for attention – Avengers 2, Star Wars VII,  the Hunger Games finale, Jurassic Park 4, World of Warcraft, a new Terminator movie.

There’s a lot of stuff for fans to wait anxiously for. I just hope some of this stuff delivers and isn’t like the abysmal summer we’ve just endured.

A lot of this ‘Affleck flak’ reminds me of the Michael Keaton casting back for the 1989 Tim Burton film Batman.

For those old enough to remember there was tons of publicity and debate about having Keaton wear the cowl. Some fans were questioning Burton’s sanity over the idea. I recall endless discussions in the cafeteria, in comic shops, walking to and from school with friends about the choice of Keaton.

Instead of focusing on Mr. Mom and Beetlejuice playing Batman we latched onto Keaton’s role in Clean and Sober and convinced ourselves he doesn’t always have to be funny in a movie and he just might be able to pull off playing Batman! Remember how some people were bummed that Adam West wasn’t going to play Batman again? That was a hoot!

Today it’s the same type of fan passion, only now the internet has allowed fans to gather from across the globe to voice their heated opinions with each other. This will be one long two-year discussion until we finally get to see this movie. 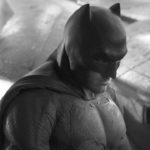