Jerry Lewis writes, directs and stars in a movie about….Jerry Lewis being funny. That is all.

Jerry Lewis can be a very divisive performer. Some greatly admire and worship him. His solo comedies and the ones he starred in alongside Dean Martin are revered. Plus, not only his comedy performances are respected, but his talents as a writer and director, which he took on in the latter part of his career, made him a complete comedy industry.

The go-to joke is this revered following he has in France, where they view him as a genius. He should always be able to get a free meal in Paris if he ever needed to.

Then there’s others who just aren’t fans of Lewis and don’t get what all the excitement is about. What’s so funny about a guy yelling, “Hey lady!” and making goofy faces throughout an entire movie?

I’ve always been in the middle with Lewis. I like some of Jerry’s stuff, others I don’t care for. It’s a boring stance, but what can I say. Usually there’s hit or miss gags that run throughout his movies for me. One scene I can find amusing and in the next I’m groaning and rolling my eyes. Let’s get this title out of the way first. Filmed in ’81-’82 originally the film was called Smorgasbord. It was released not surprisingly in France, where I suspect it did much better business than in the one U.S. city it was shown., Wichita Kansas.

The movie went nowhere and was eventually released straight to VHS and cable under the changed title Cracking Up. Either name works for the movie.

I caught some of this when it was making the rounds on cable back in the day, but I was always more of a Hardly Working kid, since I saw that Lewis movie in theaters and subsequently watched it many more times on cable. I’m somewhat clouded with nostalgic affection for that flick, even though I see it’s not a good movie. Rewatching it years later I realize now how bad a flick it is.

Cracking Up never really got on my radar. It wasn’t until recently while TCM was having a marathon of Lewis movies to commemorate his ninetieth birthday I sat and watched all of Cracking Up. Despite it being a better movie than Hardly Working (which ended up having some unexpected success upon its release) I can’t say I enjoyed Cracking Up very much. I probably should have watched this when I was five and it would have gone over better.

The movie is basically a series of random gags, vignettes and jokes held together by the slimmest of premises. Lewis plays Warren Nefron who is suicidally depressed since he just can’t do anything right, not even killing himself. He goes to shrink Herb Edelman for help. From there we watch as Nefron relates random stories to his doctor and the movie goes off on out-of-left-field adventures with Lewis playing other roles and him having encounters that showcase his particular brand of comedy.

This is a tough movie to talk about since it is so bizarre and such a stream of consciousness comedy that either you’ll find the gags funny or lousy. It’s very much the way I feel about most Lewis movies, the only difference here is that there is absolutely no real tangible story or characters to get invested in and root for.

This is simply Lewis being Lewis, who apparently dreamed up literally dozens of haphazard silly ideas and lets loose performing them. Since he’s not confined to any kind of conventional story the movie itself is practically a gag reel.

I can see how Lewis fans would love this movie. It’s almost like a ‘Jerry Lewis comedy’ in its purest form. Lewis was in his mid-50’s at this point and he still looked in surprisingly good shape and able to take pratfalls like a pro.

And I gotta admit I started to admire the trippy freedom that the guy was reveling in with this movie. Breaking the fourth wall, recurring jokes, outlandish sight gags, playing different characters, use of obvious stock footage for punchlines, the camera staying on Jerry for minutes at a time while he would fall down or do his mugging schtick, the movie goes absolutely anywhere he wanted it to at any given moment.

I’m not sure if Lewis just didn’t want to progress his comedy any further or if he wasn’t aware that comedy styles were changing. By 1983 it was the peak of teen/sex/comedies and when Saturday Night Live alumni began stepping into popular feature film comedies. That’s what audiences were going to see. And here’s Jerry doing the same type of goofy humor he specialized in since the 1950’s.

I have to give him credit for hanging on as long as he did. But I don’t know if I should consider this a daring movie by Lewis showing that he unwilling to adapt to any new trends or a huge sign that he had become an out of touch antique artifact of comedy that was unable to evolve.

Whatever the case is, I can’t say I was laughing very much while watching it.

It really started to remind me of Lewis’ first directorial feature The Bellboy. In that one Lewis played what else, a bellboy in the Fountainbleuau Hotel in Miami. From that setup begins a series of scenes and gags as Lewis wrecks havoc in the hotel.

Compared to Cracking Up, I much prefer The Bellboy, which was his first directed film. It’s still very much a free-wheeling Lewis comedy, but it’s based around the hotel setup. There’s a certain framework and restrictions that Lewis had to work with and think up clever jokes surrounding that particular locale.

In Cracking Up, which will probably be his last directed film (both films are kind of interesting bookends to his directing career) there is no framework at all. It’s like a painter deciding not to allow himself be confined to a canvas and is just splashing paint all over the room. It’s a neat idea and sounds pretty daring, and although I admire the approach it’s probably much more fun for fans of Lewis to watch than it was for me.

Plus, I didn’t think most of the gags in Cracking Up were as funny as The Bellboy. There are few hits, but at a certain point I just got bored with going from one random vignette to the next Some of them get so drawn out it got annoying and repetitive, the punchlines were so telegraphed I could see them coming from the opening setup. I ended up counting down how much longer the movie would go on.

I think Lewis has done much funnier and more accessible comedies. If you’re really curious about Cracking Up you could be just as well served by watching random clips of the scenes on Youtube. That will give you a good idea of what it’s all about. I couldn’t recommend Cracking Up to anyone other than hardcore Lewis devotees. Or to someone French.

This is the opening credits of the Cracking Up – as you can see Jerry doesn’t waste much time giving his fans what they want to see, which is Jerry being Jerry 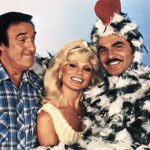