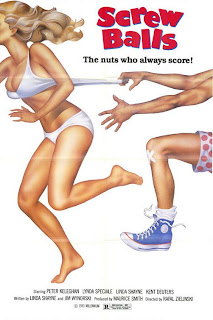 “Oh shit Melvin, you jerk off so much if you ever did get laid you probably would scream out your own name.”

Teen/sex films essentially have one goal – to provide some chuckles and show some boobs. Most of the films in this genre don’t have any loftier aspirations than that. At its height of popularity, the majority of teen/sex films of the 1980s were simply riding the wave of demand by audiences at the time.

They were cheap to make, would get some decent attention from their targeted demographic and could easily make a tidy profit. It was a win-win for both the filmmakers and the audience who wanted to see them.

Screwballs is as basic as it gets with this formula. There might not have ever been a film with a more apt poster image. What you see there – with the faceless cartoon guy pulling off the cartoon girls bra….. that is exactly what you’re going to get. Anyway, we have Rick the jock stud, Brent the rich cocky kid, Melvin the overweight, sloppy kid, Howie the geeky kid. And Tim, the new kid at school.

The film tries to include all the stereotypical characters in the genre. So along with our lead characters we get the young flirty girls, goofy teachers and sexually obsessed older women. If you were a naive young influential kid watching Screwballs in ’83 you wouldn’t be able to wait to get to high school after watching this! You’d be  thinking a carnival of fun and nudity was waiting for you in the hallowed halls of education.

While doing time, our heroes decide to pool their talents together to see as many boobs at T&A as possible. A plan as simple as it can get. Plus, they set their sights on getting one of them to score with the unattainable Miss Purity Bush. Or at least get to see her boobs.

It’s like a juvenile version of The Breakfast Club. I wonder if John Hughes was inspired by this in any way….

Just based on this setup, you know if this is your thing or not. It doesn’t take long to see what Screwballs is going to be offering up. Just by the opening shot of two mini-skirted girls hanging a sign with a huge inflatable hot dog hitting them in the ass, you know whether to jump off this ship. Well, even before that! Like I said – look at the poster!

The film consists of a series episodic schemes of the guys doing exactly what they set out to do. So we get a bunch of sex-related jokes, outrageous peeping-tom scenes, juvenile humor and of course – boobs.

There’s really not much more than that. It might sound like an ideal 80’s teen/sex comedy. And on the surface it does deliver the basics of what you expect to get I suppose.

But it’s just so friggin dumb! Screwballs appears to have been clearly inspired by Porky’s. No surprise since that film was a huge profitable hit and that seems like a flick worth trying to repeat the success of. Screwballs was a Roger Corman low-budget Canadian production, filmed mainly in Ontario and was one of many films of the teen/sex movie stampede at the time.

The film is supposed to be set in the 1950s, but I guess because of the budget or maybe because it was just too hard to maintain the look of the period, the film disregards it after awhile.

I’m not sure why they even decided to make it a period film. It’s not like it’s American Graffiti with oldies playing on the soundtrack or the characters spend time at quintessential settings we would associate solely with that time period. The facade of placing it in that era just seems pointless and the movie doesn’t evoke the mood of the ’50s at all.

So it’s sort of a strange combination of some 1950s cars and pieces of wardrobe with contrasting 1980s hairstyles. I think that’s the aspect to the movie I found the most entertaining actually. It just looks so bizarre. I just sat there with wide-eyed disbelief that a scene was supposed to be taking place in a 1950s drive-in and they have a Pam Grier gladiator exploitation film playing on the screen.

They could have used probably thousands of public domain films from the 50s to throw up on the screen. Even the old movie advertisements, but they went with The Arena from 1970. Plus, they incorporate it into some edited mayhem with our main characters. It’s just really strange.

But the production design is not why we’re watching this.

We want to see some funny and some boobs. As far as that goes, the gags are completely immature and juvenile. They all play out like some kind of warped sleazy, R-rated version of an Archie comic.

It’s all silly misadventures like spiking the punch at a party with Spanish fly. An after-hours game of strip bowling. Trying to hypnotize girl swimmers. Burying a guy in the sand so he can use a periscope to look at unsuspecting chicks on the beach.

Granted, you can’t take this serious when they have characters running around with names like Bootsie Goodhead, June Busch, Melvin Jerkovski and Principal Stuckoff.

The boob-quotient is extremely high in this flick. The filmmakers were smart enough to know what kind of movie they were making and what their audience wanted to see. So they cram scenes with as many exposed boobs as they can. Ironically, the most famous nude scene in the movie, the payoff the whole story builds up to, was done by a body double! What a gyp.

The cast consists of actors that you’ve probably never seen outside this movie. I think a few stayed in the biz and continued to work, but the majority of them look to be young actors (or wannabe actors) that fell into working on this flick somehow. Plus, there’s the required young ladies that willingly took off their tops all for their art, for some quick cash, for a laugh or to get their foot in the showbiz door and then they quietly disappeared.

I’ve always wondered where these women are now and how they feel about their association with being in a teen/sex film. I don’t mean any recognizable stars from the early 80s, just the background extras. The nameless cheerleaders, students, the party girls. The woman who was billed as ‘third rack from the left’, is she at all nostalgic about her younger days when she had no problem parading topless in front of the cameras? Does she regret it, thinking at the time it was her first step of being a star and it ending up being an embarrassing experience?

Is she still hoping her family won’t ever know what she was up to that summer? That she still hopes no one will ever discover the boobs that flash on screen in that movie that you can buy for a buck in the supermarket are actually hers? Is it a secret she keeps to herself or does everyone around her know about her movie experiences and they just have a good laugh about it?

Someone should do a Where Are They Now project on the anonymous boobs we see in these movies. Maybe a side by side comparison of how everything held up thirty years later.

There’s one appearance by a very well-endowed stripper who I’ve heard was the girlfriend of the writer of the film. He wrote a scene for her just because….well I guess she wanted to be in a movie. The scene does seem somewhat out of place. All the mischief making mainly takes place with our heroes in school or teen-type of hangouts, then suddenly they’re in a strip club just watching this stripper. But what the heck – more boobs.

Screwballs has its fans. It gained a level of popularity and spawned two sequels Loose Screws (1985) and Screwball Hotel (1988). I never saw either of those so I don’t know if they stuck with the same cartoon-ish tone the first has. Obviously folks must of enjoyed it. There’s still got to be a devoted audience for it if its gotten a Blu-Ray release!

I can appreciate how the film serves up the goods in its particular genre with an unashamedly no nonsense, simplistic approach. It really doesn’t try to hide what it is.

Despite liking naked boobs however, I unfortunately didn’t find any of this movie entertaining and it started to become a real chore to sit through.

Screwballs has been referred to as the ‘ultimate teen sex comedy’. And I suppose I can technically see it hold that title. It’s as stripped down, elemental and primal an example of the Teen/Sex/Comedy genre out there. However, that doesn’t mean it’s the funniest. Or the sexiest. Or the best of the bunch.

Screwballs was one of those movies I missed first time around. The odds are that if I was watching this in my young adolescent years when it first hit theaters, cable or home video I would be telling you how much I really liked it, but that time has passed. I think I missed my calling to be a Screwballs fan. It was just a movie that left me shaking my head and thinking – “why am I watching this…”