I wasn’t planning on doing any major commenting on the Spectre teaser trailer. I was content to just leave it at – “Yeah, it looks good. Looking forward to seeing it.” Yet, since being asked for additional thoughts on it I figured I could squeeze more reaction out from this ninety-second tease. That really shouldn’t be too hard from the guy who did a nearly two-hour dissection of Quantum of Solace. Boy, did I go overboard with that project!

So the Spectre teaser was much better than the that teaser poster that was revealed. You know, the one that just had Daniel Craig standing against a plain background with just the title of the movie. Whoopee. The teaser trailer was much more effective giving us hints of what we can expect from the story, the locations and the actors. That’s what a good teaser is supposed to do – whet our appetites. And mine is now whetted!

I’m not going to go through a shot by shot analysis of the teaser and try to dissect everything we saw in it and begin theorizing on what it all possibly means. Enough fans are doing that. Besides I’m getting somewhat burnt out on the idea of scrutinizing every frame to a trailer for every big upcoming movie to try to cull clues from it. It’s kinda losing its luster for me.

With Spectre I’m not even watching any of those short on-set videos they’re releasing and I’ve just been trying to avoid reading or hearing too much about it. I think I’d prefer to just to be anxious to see it, not know everything about it, hopefully be somewhat surprised by things when I actually see the movie and save all the talking about it that us Bond fans will be doing for afterwards. But since you’re reading this and are expecting to read some kind of thoughts and opinions on the teaser I will say that I think Daniel Craig looks younger here than he did in Skyfall somehow. He looks more like Quantum of Solace -Craig than Skyfall – Craig.

I always thought his shorter haircut in Skyfall made him look a bit older. He has those hard features anyway, but his shorter hair accentuated them somehow. I guess it worked in the story with Bond being out of shape, scruffy looking and feeling perhaps he’s been doing this job for too long, but in Spectre it looks like he’s going too look a bit more cleaned up and lively.

One little thing I have noticed is that they changed the spectre ring logo. That octopus no longer has eight legs, but seven. I wonder what that’s all about.

My initial thoughts were purely for business reasons. I started to consider the possibility that EON couldn’t reuse the old spectre logo, that it was still copyrighted and out of their hands somehow. So instead of going through more legal hassles they dropped a leg and made their own new version of it. They just felt lucky enough they’re getting to use spectre again and didn’t feel like fighting for that eighth leg on the organization’s logo. I wouldn’t rule something like that out. But maybe they just redesigned it for this new Bond.

So with only having seven legs can we call that logo an octopus anymore? Or are they dropping the octopus idea and that logo is meant to be an actual ‘spectre’, a ghostly emblem? A head with a flowing body under it and they’re just representing it with the leg shapes. I’ll be looking forward to hear interviews with the designers about the reasoning as to why that famous logo was redesigned.

What I found the most interesting part of the teaser trailer – besides a lot of the images that look very nice and Craig’s hair – was that it establishes that all of Craig’s Bond films are connected and are happening on a sequential timeline.

That’s really a first. It used to be kids could just start watching the Bond series at any point and not have to worry about any kind of chronology or anything like that. Now with Craig’s films that’s changed.

Casino Royale that was the first, Quantum of Solace is an epilogue to it so it helps to know a bit of Casino background when watching it. Skyfall was pretty much a stand alone. Even the Aston Martin we see in it doesn’t appear to have any kind of connection being the same one Bond won in Casino – it’s like it’s a completely different car. But now we know some of the Skyfall events get followed up on in Spectre.

I thought it would just be some of the new actors and characters that were introduced in Skyfall to reappear in Spectre, but it looks like Skyfall will be reverberating throughout the story – or at least in the beginning to help jump start events in a new one. This along with the reappearance of Mr. White who we first met way back in Casino Royale, we got ourselves a Bond timeline happening here! One thing that I keep thinking about is how the Bond series had never played a chronological game with the films. They never worried about continuity.

And in the few instances a remark or reference was made to its history or the character it was a kick to hear and created a small jolt of excitement – at least for me. Like, I loved seeing Roger visiting Tracy’s grave in For Your Eyes Only!

The old parlor game was trying to organize the Bond films in some kind of order. With Craig coming along – we don’t have to worry about debating the groundwork of his films. They’re pretty much laid out for us.

Here’s another thought – and I’m really jumping way ahead here – say the rest of Craig’s Bond films follow this sequelized pattern, which I have no problem with – will all future Bond adventures feel compelled to do this?

Craig is going to leave the role one day, and I wonder if the producers will feel the need to maintain this chronological format for the next 007 actor. You know, give him a sequential series of films that each build off the previous one. They obviously must be pleased with the success they’ve been having with Craig’s films, so I wonder if they’ll stick to this layout.

Plus, now the rage is all this ‘shared universe’ stuff! Everyone has become so gung-ho with this idea. Every friggin’ movie series has to have a shared universe and some are being made solely to bank on audience’s excitement with that idea. The older Bond films were so far removed from that format. With them being just stand alone movies it might be viewed as a passé way of presenting the 007 series and maybe they’ll just jettison that.

I don’t know. It’s something to ponder other than pooling over every frame in the Spectre teaser, which I don’t feel like doing. I’ll just say I liked it, I’m looking forward to it and am feeling optimistic about it.

A little funny side comment – the big spectre meeting reminded me of the party scene from Eyes Wide Shut. And I’m also wondering if Judi Dench’s porcelain British bulldog will be sitting somewhere in the background of Bond’s apartment.

do you have any thoughts? 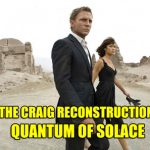 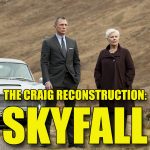