Vanessa Williams works for Cyrez, a big defense contractor. She is about to blow the whistle on the company for a cover up involving the sale of a hi-tech weapon to the black market. The FBI is ready to pounce on them once Williams gets the evidence against theme – but Cyrez finds out what she’s up to and now her life is in danger!

That’s where Arnold Schwarzenegger comes in. He’s John Kruger, the best U.S. Marshal who works for the Witness Security Protection Program. He’s known as the “Eraser”. He can make people disappear in even the most high pressure situations and knows all the tricks of how to keep them hidden and safe.

Williams sounds quite secure with him watching over her huh? There shouldn’t be any problem with her testifying and putting the bad guys behind bars. Wrong! Schwarzenegger’s mentor at WITSEC James Caan is in on the cover-up and is now using all his resources towards framing Kruger and to kill the witness!

It will be up to Arnold to survive attacks from his own people, protect Williams and get evidence that will prove the guilt of all the bad guys.

Between taking comedy detours with Junior and Jingle All the Way, Arnold managed to star in one popular action movie in the mid-90s (aside from True Lies). According to IMDB, Eraser is apparently considered by a lot of fans, as being “the last great film of the ‘classic’ Schwarzenegger period, which started in 1982 with Conan the Barbarian.

It’s funny when I read that, since I always had a similar feeling! I think there is something to that argument. Yes, Arnold went on to star in other action films after Eraser, but they feel different somehow. It’s like a metamorphosis took place not long after Eraser. We no longer got the traditional big-budget, frolicking Arnold action films we were used to seeing from him up to that point. Why is this? What changed after Eraser? Well, Arnold was no longer at his peak of popularity. His reign as a box office king never got as high as it once was. His Terminator glory years were winding down. His action films felt less and less distinctive from one another.

As we know, Arnold would return in his signature role as the Terminator time and time again, but that neither did him or his fans any favors.

Eraser doesn’t have the same kind of intriguing description that you could coin for it of a lot of his films. It’s just ‘Arnold is a U.S. Marshall protecting a witness’. That doesn’t have the same flair as his other films. It sounds rather routine in comparison, and that blasé feeling is appropriate for Eraser. It’s not a standout, memorable Arnold action film.

What else makes Eraser one of Arnold’s last great gasps in the action arena. Well, computer effects began to come in and started to help with a lot of the heavy lifting of the old school stunts that featured heavily in earlier action films.

End of Days and The 6th Day weren’t huge hits and are somewhat forgotten today. Him playing Mr. Freeze in Batman and Robin might’ve scored him a big payday, but it didn’t really satisfy his fans. Then he went into politics and reemerged as something of an older action star statesman. By 1996, Arnold’s best action films were behind him and what was left was just bit less expensive and more forgettable retreads of the classic style of action flicks with standard shoot outs, one liners and explosions. They never came close to reaching the explosive heights that made his earlier action movies so popular with fans and would be the ones towards the top lists of his best films.

So, that leaves Eraser as ‘his last great action film’. Directed by Chuck Russell, I certainly would not call Eraser “great”! However, while it’s not top tier Schwarzenegger, it remains a fairly straight forward entertaining actioner. If you can accept some of the logic leaps and go with it, it rewards you with some exciting sequences, it has some well done shoot outs and an effective supporting cast who all deliver what is needed for their parts. I can’t say there are any real memorable Schwarzenegger one-liners in Eraser though. We get the expected, “You’ve been erased”, which is a no brainer. A lot of fans like his line after shooting an alligator and saying, “You’re luggage.” I think it’s more eyerolling than quote-worthy.

The story is very routine. It could star any action star or be a cheap streaming movie. Which I’m betting you could find dozens of without much difficulty.

I think there should be an official sub-genre of films where a character who needs protecting, hooks up with a protector and bad guys are on the loose trying to kill them. Just off the top of my head I think of 1987’s Assassination with Charles Bronson and Jill Ireland. Quick – what’s a movie with this plot that you can think of?

Here’s my theory about Eraser, I think it was modeled on the success of 1991’s The Bodyguard. There are some similarities between the two movies.

It’s another protector type of movie. The casting of former Miss America and singer Willams certainly harkens back to Whitney Houston in The Bodyguard. Plus, she got to contribute a song to the soundtrack. There is much less romance in Eraser and more action though than in The Bodyguard. It’s an Arnold movie after all, so they knew big guns and explosions are his strong suit and what his fans want to see from him. There are some similarities between the two movies.

We first meet the famed ‘Eraser’ saving mob informant Robert Pastorelli who is very close to being killed by some goons. Arnold easily kills the men, stages Pastorelli and his wife’s deaths and blows their house sky high. It’s a pretty grounded sequence, as we watch Arnold slickly taking out the bad guys, doing some quick thinking of how to stage Pastorelli and his wife’s deaths, getting them out of the house before it explodes just as the police arrive. I say grounded, compared to how the action escalates later in the film. But it’s a cool introduction to Arnold U.S. Marshall.

At the headquarters of WITSEC come in some acting heavy hitters. James Caan plays Arnold’s mentor and friend. James Coburn is the head of WITSEC. And we get a very short appearance by James Cromwell as the President of Cyrez who’s up to no good and discovers the FBI knows about his dirty dealings.

After Williams has successfully got all the dirt of Cyrez on a computer disk – yes that old trusty plot device ‘a computer disk’ – the bad guys are after her, but she’s under the protective wing of Arnold who is prepared to protect her at all costs.

Of course, Cyrez’s corruption just don’t stop at Cromwell, but it leads to much more powerful people. Some that Arnold even works with and trusts! Can you figure it out yet? It’s really not too difficult to see who’s going to fall on the bad side. No real surprise. Yep, it’s Caan who is a baddie and is out to get Schwarzenegger and Williams. It might be predictable that he’s in cahoots with the evildoers and will be the adversary, and to be fair he drops his buddy-buddy persona pretty early on. Once he goes bad, Caan is actually quite devilishly entertaining in Eraser!

Caan becomes a real standout in the movie! It appears he’s having a grand time playing the villain. He doesn’t hold back when he kills innocents, he’s condescending, flippant and barks at his cronies and seems to relish getting to play bad throughout the movie. He’s a lot of fun to watch!

Williams is…fine. She is attractive, effectively looks scared and worried as baddies put her in danger until the moment Arnold bursts in and saves her. But oddly enough she doesn’t feel like a real prominent presence in the movie. It’s strange. She’s the co-star, she’s Arnold’s co-star, she even appears on the poster with Arnold! She’s in a lot of the movie, but her character doesn’t stand out at all! She’s more of a necessity for the story than a real character who’s given a personality and connects with Arnold. It’s rather they wrote that they needed a witness for Arnold to protect, we’ll make her an attractive lady…I think that’s all we need!

Now looking at it, the poster for Eraser is actually a pretty good visual description of Williams’s character in the movie. She’s looking to the side standing behind a sharply in focus Arnold under his name in bold lettering. That’s essentially her role in the actual film.

That’s one thing that Eraser is smart about. There’s really no romance between Arnold and Williams in this. It doesn’t go down the predictable route of them being paired up, on the run and them butting heads and bickering the whole time before eventually falling for each other. That is not here and it serves the movie well! Willams dutifully trusts Arnold from the start, she’s too smart not to fall for any deceptive lies she hears from others and there is not a love scene between the two at all.

It’s quite refreshing. Eraser sticks with its straight forward story, doesn’t try to complicate it and stick to his core of bringing action to the screen.

Big silly action is served up! Arnold saves Williams from an attack at her house. This is where we’re introduced to the hi-tech gun that can basically see through anything and zero in on the target. Along with some unique weapons, like a bomb that covers a room in nails.

Arnold jumps out of a plane without a parachute, then plays chicken with the plane who’s aiming to run into him. There’s a bizarre detour at the New York City zoo where Arnold shoots out with baddies and those alligators/crocodiles come in and add more menace to the fight. They look kind of dodgy. It’s that mid-90s CGI that never looks quite up to snuff, especially watching it today. Then of course there has to be a climactic battle, and why not have it at pier at night. Arnold gets to carry two giant guns shooting all over the place, him and Caan fight on a big trailer that being hoisted by a crane. It’s all standard stuff, but heck, it is well done and will shoot in the action rush fans are hoping to see.

It might not go high on Arnold’s highlight reel, but it’s worth a mention. I wouldn’t put it on the high end of action flicks, but it sits comfortably in the middle.

When rewatching this I had no idea a soft reboot was released Eraser: Reborn. It doesn’t surprise me they dug up this title for a new movie. An older Schwarzenegger movie title carries some cache. As I’ve said, it’s an easy story setup to use for an action movie. Protector, the protectee and bad guys. Why makes things any more complicated. Now cue the action pieces that pop up throughout.

It doesn’t have Arnold as the star in it though, so my interest for it drops immediately knowing that. 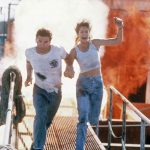