CBS unveiled a new six and half minute trailer for its new fall show – Supergirl.

Melissa Benoist will be starring as the DC Comics title character in all her glory. To lend support Mehcad Brooks will be James “Jimmy” Olsen, Calista Flockhart as Cat Grant, along with Chyler Leigh, David Harewood and Jeremy Jordan.

So cutting to the chase what did I think of the trailer? Well, I certainly wasn’t bouncing up and down in my seat as I watched it unfold. I’ll give it a chance, but I’m not going to be surprised if it’s a show I bail out of at some point.

It really looks like it could go either way. I don’t want to completely diss the entire show based on this trailer. So I’ll break things down into PRO’s and CON’s.

I like the fact that a female superhero will be headlining her own show finally. The scrapped Wonder Woman show from a few years back could have gotten there first and given female superhero fans someone to root for on a weekly basis, but that fell apart. It’s a constant criticism that the superhero genre is heavily male-oriented and it’s been leaving females out of all the fun. Damn, even the Avengers toyline is getting a backlash for not including a Black Widow action figure! Now here’s a character little girls can watch, dress up as and become a fan of. That’s pretty cool! Too bad the show will debut in November and not earlier. If the show is any good and takes off perhaps Supergirl would have been the favorite costume for little girls this Halloween. My 3-year-old niece already loves running around in her little Supergirl costume. Seeing a real Supergirl on TV would make her and the rest of the little girls in the world (and the women) geared up to cheer.

The costume and Benoist in it looks good. It doesn’t look like there’s been much radical tinkering with it since Helen Slater wore hers. The fabric looks different and the colors are a bit darker, but the show certainly isn’t! It looks like a bright, shiny show. No one can complain that this DC project looks too dark! Oddly enough I felt more ‘Superman-ish’ moments from the trailer of Supergirl than I did in all of Man of Steel!

The special effects were better than I had expected for a television show. Kara’s plane save didn’t look too bad. Of course this could be that the budget for the pilot was much more than the average episode will be, so maybe we shouldn’t expect too much after this. But still in this trailer the effects looked decent for a television show.

I thought the trailer itself was put together very poorly. The tone shifts from being comical, to exciting, to romantic, to mysterious and it never gels together. It’s like a patchwork of jumping around to please the female and male demographics.

The first Flash television trailer wasn’t like that. This Supergirl one is really awkward. Plus, the use of the horrible pop music at one point really made my eyes roll. It’s those opening scenes showing Kara working at a fashion magazine, fumbling with her coffee in the big city with a Devil Wears Prada-ish boss, along with that music that I think is drawing comparisons to the Saturday Night Live Black Widow movie trailer spoof.

I think they should have stuck with a shorter trailer – I felt like I watched the entire pilot episode already. It doesn’t seem like a show that I would see on CBS. Maybe years and years ago when networks would air a more eclectic mix of shows, but nowadays it’s all painfully dull sitcoms, crime dramas and talent contests. I could easily see Supergirl resting snugly alongside her other DC pals The Flash and Arrow on the CW. But what the heck, if CBS wants to give it a try let them. We’ll see how they handle it and if they have enough patience to give it time to catch on.

In superhero shows the characters romantic adventures have become just as important as their crime-fighting ones. But personally I usually find that part of a superhero show the worst.

My biggest gripes with Smallville was the never-ending, back and forth Lana and Clark romance. I hated it and it became so annoying. I’m going through that with The Flash right now. Barry and Iris – who cares! What does he like about her anyway? That she’s a blogger and wears fashionable shoes? What a terrible character she is. I want to throw something at the screen when she shows up.

I’m expecting Supergirl to be the same way with me shaking my head when the music gets slower and things get emotional with Kara’s personal life and her making goo-goo eyes at her romantic interest.

And that looks guaranteed it will happen. Things look awfully cutesy and fluffy, a bit too much for my taste. Still, I’ll give Supergirl a chance and see how it goes. I’m certainly expecting it to be better than the 1984 Supergirl movie.

Black Widow gets her own movie courtesy of Saturday Night Live

Now, do you think the comparisons to the Black Widow parody trailer and the Supergirl show trailer are valid or are people just being unfair? 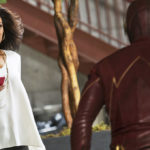