Christopher Reeve returns as the Man of Steel in his third big screen adventure!

Having saved the world from General Zod, sending Lex Luthor to prison and making Lois Lane forget all about he wears a red cape when he leaves the Daily Planet, things seem to have settled down in Metropolis. That is until a new threat emerges.

Gus Gorman, an out of work citizen discovers he’s actually a computer genius. This is actually a very lucrative skill, considering everything from coffee machines to traffic lights to the world’s defense systems are controlled by computers. Gus teams up with powerful CEO Ross Webster who has his sights at ruling the world. There’s plenty of cash to made by doing that!

Meanwhile Clark heads back to Smallville, makes a little time with his high school crush Lana Lang, meets her son Ricky and encounters the old school bully and Lana’s former flame Brad. However Supes, still manages to foil every scheme Webster and Gus come up with. Angered over Superman spoiling his plans, Webster ups the stakes and decides Supes has to be gotten rid of. Now Superman will be facing some man-made kryptonite and a powerful super computer that looks unbeatable.

Can Superman save the world again? Will Gus settle into his evil ways? Can Lana ever manage to drum up enough courage and leave Smallville? And where is Lois Lane during all this???

Directed by Richard Lester (with Richard Donner having absolutely no hand in any of this), Superman III takes a much lighter, comedic approach to the Superman saga. It would have to considering Superman stars alongside one of the funniest comedians of all time. But the real question is – does it work? 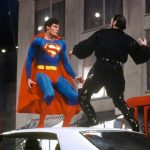