Once upon a time, about a year ago there was a happily married couple who had a nice house, two pretty awesome boys and a bright future laying ahead of them. They appeared to be the picture of the ideal American family. It was the kind of picturesque image people dream of attaining.

Then one day tension unexpectedly blanketed this sunny household. The husband began to get distant from his wife and kids. He started to have a shorter temper, didn’t seem that interested in being around any of them. When asked about his odd behavior he simply replied he just needed space.

The word ‘space’ should sound off alarm bells.

Space he was given, but it didn’t seem to help. Suddenly he was working into the late night hours never coming home for dinner to his wife and two sons. It was explained how he had more work projects that were keeping him busy and that would keep him away more and more. He did somehow find the time with ‘the space he needed’ to begin working out regularly. He even lost some weight, which somehow made his wedding ring no longer fit. Hmm. I guess he was really working out his fingers. Doing a lot of thumb curls or something.

When he did show up at home that tension and distance was still present. He would suddenly yell at his wife for doing his laundry! That was never an issue before. Something must be going on here. What is his problem. He was no longer acting like the level-headed considerate person he once was.

The tipping off point was the yearly family vacation. It was simply an hour away getaway from home at a rented beach house for several weeks the family did it every year and the two sons loved it. It had already become a tradition in the minds of the two young boys.

That year would be different. “I have to work and won’t be able to be there too often”, is what the husband told family and friends who were all expected to enjoy the getaway with each other. When he did show up it would be for a day here, an evening there and there would be that distance again. Despite their Dad showing up for a very removed day, taking them to a toy store, buying them some toy guns and soon after leaving ‘back for work’, even the two boys felt the strangeness.

What was equally strange was how good ole’ Dad had a sudden fixation with his cell phone. He would constantly be looking at it, typing on it, holding it in his hand, staring at it while sitting at the beach. Barely even taking the time to lift his eyes up to gaze at the ocean, look at his wife, watch his children. He was like a fifteen-year-old tweeting crazed teenager with that cell phone. And this was a guy who could have cared less about his cell phone a few months ago.

Then just as quickly as he would appear, he anxiously got back in his car to take the drive back home because he ‘had to work’.

This didn’t go unnoticed by anyone! It really didn’t take much more for everyone to suspect something was very, very wrong. Even those who could never believe ‘he’ could possibly be cheating on his family with someone else, those who were struggling to come up with a rational defense for his bizarre behavior was gradually worn down. They would come to realize there was no other explanation. And of course there wasn’t one. He was cheating.

It’s shocking how so many family and friends’ perception of him changed so dramatically when this was confirmed. Everyone went through a gradual acceptance period, simply because this was almost too mindblowing for people to believe. Him??? Somehow people tried to justify his actions in their minds because it was just so inconceivable that this person they had known all these years could be a disloyal, deceptive individual who was hurting his family in unimaginable ways – and subsequently  would come to hurt them even worse in the year to come. But when they finally absorbed it it was as if a switch was pulled and they now saw him in a completely different light. He was a different person than the one they knew.

All this seems so ridiculously obvious now that it’s embarrassing. No one wants to believe that a person that they were close with, that they thought they knew and trusted could do such a thing. That’s what makes it all the more painful to learn. 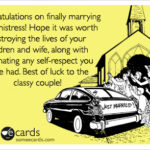 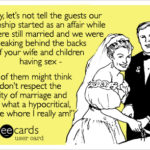 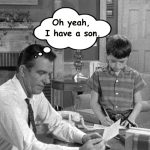