The Asphalt Jungle is a noir caper film based on a novel by W.R. Burnett. It has shady characters, a carefully planned crime and an inevitable unraveling of it by a cast giving some terrific performances all directed by John Huston. There’s a lot to love here.

Erwin “Doc’ Riedenschneier (Sam Jaffe) is just released from prison, but instead of going the honest route he’s already planning his next job. This isn’t just an ordinary nickel and dime score he’s aiming for, but he’s gunning to steal at least a million bucks in jewelry.

There’s a few things he needs to get this rolling. First he needs $50,000 to hire a ‘box man’, a driver and ‘a hooligan’. Alonzo Emmerich (Louis Calhern) a corrupt, rich lawyer stakes him the dough and Doc selects his team. Louie (Anthony Caruso) a family man and expert safecracker, Gus (James Whitmore) a diner owner to be their getaway driver and Dix Handley (Sterling Hayden) as the muscle.

Handley is an imitating fellow, however he respects the code of honor amongst criminals and has a dream of buying back the farm his family lost during the Great Depression. With a team in place, during a dark night in an anonymous city in the Midwest the men set their plan in motion to score the jewels. However, as with all great caper films things don’t according to plan. Complications arise with greed, backstabbing and mistrust amongst these men all the while trying to avoid the enclosing police dragnet that is looking for them.

The Asphalt Jungle is one of the most famous heist films ever. It has many noir elements that were popping up in films after WWII. Unsavory characters, a dark atmosphere and naturally a crime at its center.

Despite these people being such despicable, cynical sorts, some of their virtuous traits and personal motivations shine through and make it easy to understand why they’d take such huge risks. Plus, it also humanizes them and makes me see whether this gamble is going to pay off for them.

Hayden’s talents of being a brute is the reason he’s picked for the job, but it’s also his ‘on the level’ beliefs that make Doc take a notice to him. You can see the humanity in the guy with his goal of buying back the family farm, the respect with which he deals with his agreed role to his fellow crooks and the facing of the debts he owes. He’s not a good guy, but he’s honest to a fault.

Doc is himself a prime example of ‘honor among thieves’. He’s certainly a criminal, he’s ready to steal, but he’d rather rot in jail than betray his partners. John Huston’s direction is top notch, utilizing the dark city streets to maximum effect – we get that bleak ‘noir-ish’ look and atmosphere we would expect. Dimly lit backrooms with our characters huddled together making plans.

The heist itself is a very tense sequence with no music, only street noises, sounds of a drill and worried looks on the actors. The ‘heist’ is simply the midway point after a great buildup followed by the aftermath. The supporting parts also help fill up the screen with additional rich characters. The most notable is an earlier appearance by Marilyn Monroe as Emmerich’s mistress. How far will she be willing to go to protect this guy? It’s a nice role for Monroe – and not surprisingly she looks fantastic here.

Watching her in it today makes me forget all about her iconic image and I just see this character. She fits in nicely with this cast. Even the movies title sounds so cool.

The Asphalt Jungle is considered not only a classic noir, but a classic film and it’s no surprise why. Film fans should do themselves a favor and check it out if they haven’t already. It still holds up over sixty years since it first came out. 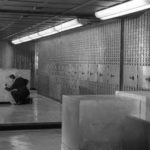