Bob Ross painting happy little clouds on his canvas for PBS audiences. I’m always surprised at how many people remember Bob and his incredibly simple show The Joy of Painting.

I say simple because it was just him standing in front of a canvas in a black studio backdrop. With his palette of paints, a variety of brushes, his large afro-style hair and his soothing voice he would create impressive works in thirty minutes in front of our eyes.

I would stumble onto his show years ago and would usually find myself entranced by Bob. I think that’s how most people discovered him. I never went looking for his show, it was just one that you would discover while flipping through the channels. Back then channels most people had available were still in double digits. That’s probably how so many people found Bob and remember his unique show.

Bob and his show is a perfect target for parody. With his friendly demeanor and all his encouraging catchphrases – “we don’t make mistakes, just happy accidents” (I still use that one to this day), it was all easy to poke fun at. But even watching clips of his show today there is an innocent charm to Bob and the show that you don’t really find much on television anymore. I imagine if they were ever to update the program for audiences today it would be much faster paced, have a hip looking studio, maybe a bunch of time lapse editing and probably a bunch of graphics whizzing all over the screen. Do audiences today have attention spans long enough to just sit and watch a guy paint on a canvas?

The way Bob made creating his paintings seem so easy I often wondered what the results would have been if I tried to follow along with one of his shows. My canvas would probably not look anything like his at the end of the show. I think it would most likely be making it’s way to the trash can rather than a nice spot on the wall.

The only reason Bob came to my mind was discovering a new remixed music video PBS Digital Studios posted on their youtube channel. It’s a pretty catchy little tune and does capture Bob’s enthusiasm for painting and the encouragement he would convey to viewers to get them to also discover the joys in it.

Watching it really brought me back to those afternoons when I was little turning on my local PBS station and watching this nice guy paint happy little trees and thinking it was amazing!

Sadly Bob died in 1995. Based on the over 2 million views and all the attention this video has gotten clearly a lot of people remember him and how he would create happy little clouds. 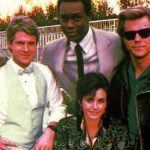