Let me say upfront I don’t really care about Teenage Mutant Ninja Turtles. I never did. I remember when their comic first showed up and just thinking “oh that’s a pretty funny title”. And that was pretty much it. I never gave them much thought after that.

I have no idea what any of the individual turtle personalities are or how to distinguish them from one another other than the color of masks they wear or the weapons they use. I’m sure fans know all their individual quirks and stuff.

To me the Turtles just seemed like interchangeable characters who wear different colors. Sort of like Power Rangers only they eat pizza. Sorry don’t mean to insult Turtle fans, but I just never got into them.

Anyway, a new TMNT is going to be arriving and boy is there a lot of reaction by Turtle fans over it. Most of the reception doesn’t sound all that good either. It seems the main complaint is the newly designed Turtles. Instead of using costumes on actors as they did in the older films, now the Turtles will be CGI creations with much less turtle kind of faces. Looking at this guy in the trailer I don’t immediately think of ‘turtle’. From the looks of it they could have been going for a big mutated frog and have nothing to do with a turtle. Luckily he has a shell on his back so that’s a tipoff.

As I said this Turtle movie is not even on my radar. But I’ll admit to enjoying listening to the ranting and complaining of longtime Turtle fans over what producer Michael Bay is doing to these characters and what fans can expect to see when the film arrives in August.

I won’t even get into what’s raising the ire of fans – casting, changes to origins and characters, the look of the turtles. It seems like there’s very little that has been greeted with positive reactions. The optimistic fans would loudly point out that Bay IS NOT DIRECTING this new Turtles flick. He’s merely producing it. He’s just the producer on this movie like he was on Texas Chainsaw Massacre: The Beginning, The Hitcher, Friday the 13th, A Nightmare on Elm Street.…all awful remakes.

Oh the director Jonathan Liebesman will probably bring something to the table to this movie. Maybe the same stuff he brought to some of the other films he directed like Wrath of the Titans, Battle Los Angeles and that Chainsaw remake. Apologies for reminding fans of his resume.

Realistically how can anyone expect anything good to come of Bay’s association with any movie nowadays. And come on – his fingerprints are all over this! Toss in this movie going back for reshoots and then having Megan Fox as a lead character and this is going to get one interesting reception. At least William Fichtner will be in it….in a role fans wholeheartedly believe he’s the wrong choice for, but hey what can you do.

Undoubtedly, Turtles will make a bunch of money. Audiences will go see it just based on the known title. I think that’s the theory behind most remakes and reboots. Plus, it will sell lots of toys and video games and probably get a sequel acouple years from now. Will this movie actually be any good and win over skeptical fans that remains to be seen.

Either way I don’t really care. I feel for longtime fans who have that growing sense of dread seeing what is happening to something they love. That feeling of betrayal can really gnaw at you. I’ve been there. 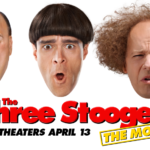 The Three Stooges Are Back! (Sort of….)