The Los Angeles County coroner’s office has changed the cause of Natalie Wood’s death back in 1981 from “accidental drowning” to “drowning and other undetermined factors”. What happens from here?

I have no idea.

Not that I have any kind of police investigatory background or any kind of knowledge of criminal law, but my instinct tells me that all this recent news will essentially lead to nothing.

Wood’s death happened over thirty years ago. If there was indeed some kind of foul play that occurred that night on the yacht the Splendour, it’s probably way too late to prove it now. I don’t think anyone will have any criminal charges thrown at them. Wood’s husband Robert Wagner and Christopher Walken were both onboard the Splendor that was floating off Catalina Island when Wood apparently fell into the water and drowned.

I can’t imagine even if either of them have been keeping something from police since that night, that now they would finally speak out about it.

So, this official change of her death to “undetermined factors” I doubt will change things much. This recent renewed attention to Wood’s death might prompt some newsmagazine reports, some new books, probably amateur speculation. But in the end the death of Natalie Wood will continue to be one of the most famous Hollywood mysteries that will keep people scratching their heads and wonder about.

For me Natalie Wood has always been one of the most stunning Hollywood actresses when she hit her adult years. The handful of her films that I have seen I’ve always been mesmerized by her. I don’t think there are really any films of hers that I’ve seen that I’ve absolutely loved, but even when I wasn’t crazy about the movie just watching her in them could keep me riveted. She could be just so adorable and sexy! The one movie of hers I saw years ago and really liked was 1963’s Love With The Proper Stranger. Starring alongside Steve McQueen it’s one of those romantic movies where two people meet each other each having different backgrounds and they fall in love.

It’s a good movie and I’ve always wanted to watch it again. It’s directed by Robert Mulligan who had just previously done To Kill A Mockingbird. Both Wood and McQueen are very good and likable, they have a nice chemistry, there’s an Elmer Bernstein score, nice black and white cinematography. However, – and here’s the mystery – it’s never been released on DVD.

I could never understand this. It’s a film that has two popular stars. At the time it was nominated for a bunch of awards, including an Oscar nod for Wood as best actress. With all the garbage they put out on DVD and Blu-Ray, the only way to watch this flick is on VHS????

I never understood this films absence in the land of DVD. The film has an abortion storyline, which must of been pretty sensitive at the time of release. I think it was the first Hollywood movie to raise the abortion issue. But I might be wrong on that.

So I used to suspect maybe that was what was holding the DVD release. But that can’t possibly be it could it? If the studio thought they would make money off a movie they would release anything. They couldn’t possibly be bothered by its content. Is the abortion connection what made Love With The Proper Stranger a bastard unwanted child? Or does that have anything to do with the films lack of exposure now and its just due to some legal issues?

I just don’t get what’s going on here.

As of now the only places you can apparently watch Love With The Proper Stranger is on a good old fashioned VHS tape or catch it on Turner Classic Movies. And apparently you are able to watch it on YouTube.

For me this has been one of the gnawing Hollywood mysteries that has plagued my mind for a long time. I’m sure I’m not the only one. It’s a shame. Two very good performances by two beloved stars in a good movie and it seems to be kicked under the carpet for whatever reasons. It’s pretty strange.

I wish someone would investigate that…. 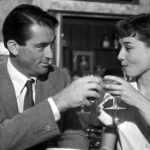