Whether you think it’s a good idea, a bad idea, whether you’re excited or appalled or if you think this is all just “mass hysteria” – it’s coming. The Ghostbusters female-starring reboot is in the works. No release date yet, but proton packs will be powering back up very soon on movie screens.

Actually I wasn’t even going to write about this. Six years ago I had done a video about the long rumored Ghostbusters 3. In 2012 I wrote about whether we should care anymore if another Ghostbusters project would ever happen. Then came the death of Harold Ramis in February.

Back in June I wrote about the thirtieth anniversary of Ghostbusters. I’ve done my fair share of talking about Ghostbusters. And quite frankly I’ve gotten burnt out hearing all the rumors about another proposed installment for the last twenty years.

I was tempted to comment on Dan Aykroyd’s statement from about a month ago in what he envisioned a new Ghostbusters project would be just because I found it so amusing. Aykroyd has been the main catalyst for a Ghostbusters sequel. He’s been pushing for it, nursing it and being the main major Ghostbusters player to keep all hope alive for fans – and Sony.

After years of unshakable hope, ideas and failed promises Aykroyd recently spoke of his desire to have Ghostbusters be a huge expanded universe that would branch out into sequels, prequels, tv shows and any other kind of media that he could think of. Probably a radio program or podcast was in there too.

I just found it funny that suddenly the idea of a big Marvel-esque franchise was being envisioned for Ghostbusters. There’s no doubt Aykroyd’s original idea for Ghostbusters was a much more mammoth story with a bigger scope than just fighting ghosts in New York City. Aykroyd always thought bigger than what would be more realistic to film (similar to his original script for The Blues Brothers).

But it seemed like such a strange coincidence that he said this after Marvel movies have gobbled up limitless cash for the last several years and the ‘expanded universe’ way of thinking has grabbed hold of Hollywood. It just sounded like another inevitably unfulfilled promise to add to the ongoing ones Ghostbusters fans have heard through the years.

He was really being overly-optimistic. I would have settled for just one decent movie Pull that off then think beyond that later. Although, I don’t really think I’d be too interested in seeing “Ghostbusters in high school” despite what Aykroyd says.

But now it may be that Aykroyd’s vision of continuing the franchise won’t ever include him! The official news hit last week that Paul Feig will be directing a Ghostbusters reboot that will star a cast of all-female ghostbusting scientists. Do you think that news got a reaction from Ghostbusters fans worldwide? Well, of course it did!

I doubt anyone was surprised that this female rebooted Ghostbusters news got a lot of attention by movie sites, bloggers and fans taking to Twitter to share their thoughts about it. Any little hint that the series was going to return in the past twenty-five years was guaranteed to catch some attention. So now that there was official news naturally it’s making waves, creating excitement, amping up anger and fueling speculation.

There’s no point in talking about what exactly the reaction is. It’s running the gamut of emotions. “Where are the original actors? Why can’t it be a sequel? If it’s a reboot why don’t they call it something else? What do you mean all-female?” From what I’ve read the trepidation of this reboot is outweighing the confidence fans have for it, but maybe I’m mistaken and have just missed reading all the enthusiasm for this.

Ernie Hudson weighed in saying he doesn’t think it’s a very good idea. Bill Murray……well I don’t think he could care any less about this stuff and is probably just happy that perhaps people asking him about another Ghostbusters movie may come to an end. Dan Aykroyd is the one I’m curious to hear from. I wonder if he’s onboard with this.

By the way whether the guys do a cameo in this or not, do people really care about that? Having a short scene with them, will that really make or break the movie? I’d rather all the originals not be associated with this at all quite frankly.

It does seem rather odd that Feig is focused on making this ‘an all female’ Ghostbuters movie. I really don’t know what to make of that decision. Sure Feig has had success with Bridesmaids and The Heat, two films centered around female characters that were popular. Those flicks are obviously what landed him this Ghostbuster gig. but does that necessarily have to mean he has to make this one all-female too? Some have called it a gimmick and have cooled their excitement for it. Feig supposedly has ideas for what the story will be and how this female group will work. This ‘all-female Ghostbusters’ idea has been kicking around for quite awhile, long before Feig was announced as director.

Remember when Aykroyd was talking about this? One of his blurbs through the years was it would be a sequel with the original cast mentoring a group of girls to pick up the mantle. I just don’t understand where this ‘all-female’ idea came from and what makes it so much more alluring than if it was just a mix of new male and female Ghostbusters.

The counter-criticism of this has been to say folks are being sexist and narrow minded over an all-female Ghostbusting team. Maybe it is. But I suspect most fans view Ghostbusters as a bunch of goofy funny guys – a pack of actors who were at the height of their popularity at the time – and perhaps it will be too much of a leap to make the characters all women.

I would guess this decision will alienate a good chunk of the audience. Already it doesn’t seem like most people are really that excited for this idea. I’m sure there are girls who like Ghostbusters and I’m not saying there isn’t a female audience for it, but I always figured Ghostbusters was more a guy thing. There’s some sci-fi, weird comedy, icky slime, shooting laser guns, a cool car, spooky stuff, it just seems like it would lean more to being a boys flick. Little boys are more likely the ones who would be running around dressing up as Ghostbusters with proton packs. Maybe I’m off on this, but I’m not sure if watching a group of girl Ghostbusters onscreen will really hit little boys the same way as when Murray, Aykroyd, Ramis and Hudson were battling Zuul.

Will little boys be anxious to buy the toys, which are guaranteed to arrive, when they watch four girl heroes fighting ghosts? Will they want to pretend and play Ghostbusters? Or maybe they’ll just pretend to be the original guys while their sisters be the new ones. The complete gender swap just seems like an odd decision.

Eh, who knows. Maybe the flick will be ok. At this point after decades of hearing about a new Ghostbusters I’m exhausted with it already. We all knew that they had to do something with the title and not let it just sit there.

I’ve accepted Hollywood studios are going to remake and reboot and re-imagine any popular title they own. Most of these remakes are just going to be forgotten and become insignificant footnotes to the original movies. The philosophy of ‘just leave it alone’ is something that only exists in the minds of hardcore fans.

It will be interesting to find out if the final product of this new Ghostbusters is what fans are hoping for and will reignite the franchise. No doubt there will be a lot interest in following the dribbles of news and casting and trailers that’s going to come out leading up to the release of this. It’s going to be a long road. It’s already been a long road!

I just feel indifferent on the whole thing at this point. Of course I’m curious to hear how it’s going to be and the reception it will get. At the moment I just don’t really care and I’ll wait until it comes out to think about it again. Maybe we can possibly find other movies to talk about in the meantime. One last little Ghostbusters story. At the start of the summer I was asked by my nephew if I had ever heard of a movie called Ghostbusters. Well, that’s when I got to feel all worldy, stick out my chest, hold my head up high and reply, “Well, of course I have. It’s one of the best movies ever made!”. He apparently saw a picture of a Lego Ecto-1 in his Lego catalog and had never heard of this Ghostbusters thing. He knows to ask his movie-loving uncle about all the important stuff in life.

So over the summer I showed him Ghostbusters one and two – and he loved them. He even loved number two, which I’m not crazy about, but he said they were both the best movies ever! Shortly afterwards he convinced his dad to buy him that Lego Ecto-1 and was very happy to show it off to me, which kind of made me jealous.

His face froze, he stared at me for a minute and finally said, “All-girl??? Ewww.” 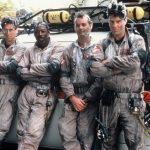 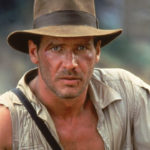 Should Indiana Jones Be Recast?