With a constant plastic smile on his face and trying way too hard to be entertaining, Access Hollywood’s Billy Bush has to me become the epitome of pestering entertainment reporting.

Leaving aside the idea of providing actual content, Bush displays silly antics, brainless questions and meaningless information. This has increasingly become the norm for most entertainment-type shows. With access to the entertainment elite and possibly being able to provide some valuable insight, such as how an actor approached a role or why a director feels so strongly about the topic of their latest film, we’re treated to what the hot starlet of the week ate for lunch.

I still recall an interview with Harrison Ford on the cusp of the release of Indiana Jones and the Crystal Skull at the Cannes Film Festival – a film that had been anxiously awaited for the past twenty years. Billy Bush gets some face time with Mr. Ford. Will he ask how Ford feels about stepping back into the role of Indiana Jones? Why does he think the character has endured for as long as he has? What has changed with the character since Ford first played the part?

Billy Bush just handed Ford some speedos and said he should wear them to the premiere. What a great interview….

This overwhelming trend of placing the Hollywood gossip over substance has prevented me from watching any entertainment shows. I don’t really care about these disposable reports. I suppose a lot of people do, since why else would these shows remain so popular. The magazine racks are full of mags with cover stories of ‘What They Are Wearing’ and ‘How They Stay In Shape’ and all that. I’m confident this years Oscar coverage won’t have many reports of stuff like, ‘how will the Best Picture Winner be thought of in fifty years time’. That’s too deep, so they’ll stick with ‘who was seen at what party!’ It’s not for me.

If I feel compelled to tune into any show with the hope of hearing any worthwhile stories or criticisms of the entertainment industry I’ll go with The Actors Studio or At The Movies. Shows that leave out the fluff and focus on the art. In the meantime, if I’m flipping through the channels and happen to catch Billy taking dance lesson or talking about his hair I’m running for that remote control to tune away.

Well, I used to stay long enough to see what Nancy O’Dell is wearing, but since she left the show there’s no reason I can think of to watch. 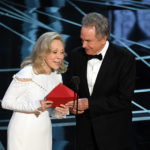 The 2017 Oscars Thoughts – Mistakes and In Memoriam