Two years after writing the hugely successful and iconic high school comedy Fast Times At Ridgemont High. Cameron Crowe would return with another teenage tale that would follow a new collection of teen characters and their adventures through youth.

The Wild Life plays almost like an extension of Fast Times. It’s a story by Crowe. It’s another California set story revolving around teenage life. Then you have the casting of Chris Penn, who channels older brother Sean’s wildly comedic Spicoli character. Chris gets his own catchphrase here. Instead of Spicoli’s surfing exclamations of “radical” and “awesome” Chris’ Tom Drake’s goto line is “It’s casual.”

It’s not too surprising how some consider The Wild Life as a semi-sequel to Ridgemont. The Wild Life did not do the boffo business or reach the popular heights of Fast Times. Despite having a cast of young, upcoming and talented actors, Crowe’s name attached and having quite an impressive soundtrack, including a score composed by Eddie Van Halen, The Wild Life has sort of fallen into the cracks of forgotten ’80s cinema and has become less remembered than many of its teen sex comedy counterparts.

Apparently, the film did have some difficulty during production. According to IMDB, the original director left and producer Art Linson was forced to step into the directing duties. He didn’t have the talents that Fast Times director Amy Heckerling had.

For all the allure and how tantalizing it might seem at first glance, The Wild Life ends up being an extremely generic, by the numbers, unmemorable movie. There’s very little that stands out about it.

Bill (Eric Stolz) works at the local bowling alley. He’s nineteen, graduated high school, is all grown up and ready to seize the world. He’s taking the big step of moving out on his own – fourteen blocks from home into the Club Horizon apartments. He’s optimistic that there are bigger and better things out there waiting for him, yet he’s still feeling a pain of regret breaking up with girlfriend Anita (Lea Thompson, looking very cute as usual), no matter how much he tries to hide it.

Anita works at a doughnut shop and hasn’t been wasting much time now being freely single. She’s been getting it on with cop David (Hart Bochner). She’s floored by this older guy and their late night sexual rendezvous’ next to racks of doughnuts. She’s even experienced her first orgasm! Something she didn’t think she’d have until she reached twenty-five!

The sex is great with David the Cop, but Anita wants a ‘real relationship’. She wants to be able to get dressed up and go out on dates, bring him home to meet her parents and just not “do it” with him in the backroom. Yet, getting serious with her doesn’t seem like something David is very interested in doing. I wonder why….?

Jim (Ilan Mitchell-Smith) is Bill’s fifteen year old little brother who’s a Vietnam War obsessed, boombox carrying teen who’s seen Apocalypse Now eleven times on cable. He spends his time getting into trouble, practicing with his nunchucks and acting tough to anyone that tries to push him around. Then one day he spots a girl that catches his eye.

Also working at the bowling alley is high school wrestler and bleached blonde party animal Tommy (Chris Penn). He’s a wild one – and the most colorful character in the film. He’s trying to patch things up with his gal Eileen (Jenny Wright). But his irresponsible, outlandish behavior has worn her down. She’s much more focused on her job at the mall – you had to expect a mall would be here somewhere. Eileen works at the hip clothing store called Fashion Dynasty. Her boss Rick Moranis has got the hots for her too and doesn’t like Tommy very much.

I would love to know how Moranis found himself in this movie. I recall watching this back in the ’80s on cable and even then being surprised at his appearance in this. Him being in Streets of Fire I can understand, but The Wild Life? It’s a pretty thankless role and the only thing notable and comedic he brings here is seeing how weird his hair looks in his scenes.

The film bounces between all these characters and their adventures without much excitement. It’s very much a ‘day in the life’ kind of story, but for the most part there’s no real interesting or surprising things that happen.

Things appear to get a spark when Tommy moves in with Bill. What you expect to see pretty much does. He’s sloppy, disrespectful, eats all the food, acts wildly and in the end throws an over the top crazy party in the quiet apartment complex shocking the manager and scaring the neighbors.

One big thing Fast Times has over The Wild Life are likable, interesting characters. There’s really no one here I gravitate towards or really enjoy watching and rooting for. The characters are unengaging and I never truly get hooked into their predicaments and problems.

As I said, Penn’s Tommy is the sole vibrant person in the film. He can be amusing chugging his beers, banging his head into his buddies and punching their fists together, but I don’t necessarily like him.

While Spicoli was a lovable, funny burnout, Tommy Drake is more annoying than anything. He’s a very belligerent, obnoxious guy. I don’t blame Eileen at all for not wanting to take him back. In fact, I thought she would be better off without him. And poor Bill having to have him as his best friend…ugh.

I’m not saying he should’ve been a completely relatable character, who earns our sympathy and we’re desperately hoping for him to come out happy and changed in the end. But at least make him at least a somewhat lovable and human, rather than typical ‘party animal’ character. Give him one or two scenes to show he’s interested in more out of life than just banging his head into his pals.

Or at the very least, make him funny! Penn has a lot of screen time in the film and the brief bits of comedy he brings doesn’t fill his time. It’s not like when he’s offscreen I’m looking forward to getting back to him. There’s a lot of dragging going on.

Mind you, Penn does fine playing the rowdy wrestler and manages to carve out his own persona away from brother Sean, but the character is not the breakthrough role as it might’ve appeared at the time. Maybe if Tommy had been a secondary, background character to lend colorful support to the leads he would’ve worked better, but him being a ‘star’ in the movie with so much focus on him doesn’t quite work.

What might be the most surprising thing is with a script by Crowe, how undistinguished the movie ends up being. There’s no real endurable lines of dialogue, no great jokes, no meaningful scenes, no distinguishing moments out of the whole movie. Maybe that’s another reason why it isn’t a movie that gripped and stayed with audiences like so many other films of its genre. The movie almost plays like an outline for a teen comedy where they didn’t get around to adding the details, story or witty dialogue to it yet.

The film is very fractured and doesn’t quite come together as a whole successful ‘slice of life’ story. For instance, Tommy declares he’s going to be marry Eileen as just another attempt to win her back. This prompts him, Stoltz and some buddies to go to a strip club for a stag party. There’s really no other reason for this marriage idea to be there other than for an excuse for this scene, which not surprisingly results in boobs on display and ends with a fistfight. The scene is just crammed in and is a clunky detour. I suppose they wanted to have a scene at a strip club just because there’s the expectation to see boobs in this type of movie, so they work them in this way.

Even Mitchell-Smith’s tale, just meekly peters out. The glamour and excitement of the Vietnam War is punctured when he sees his vet friend Randy Quaid shooting up heroin. That becomes the realization that maybe he shouldn’t be so gung ho and war happy….I think that’s the point. I’m not sure. Although for the rest of the film he doesn’t act much different than he had all along.

The climax is that wild party and compared to some of the other visions of wild humous teen parties we’ve seen in teen comedies before, there’s nothing special about what goes down in this one.

On the plus side, the soundtrack has a really great batch of tunes. Some songs listed on the soundtrack album weren’t even in the film for some reason, but I guess you did what you had to to move album sales.

Bananarama did the title song and I still enjoy hearing it. Plus there’s some classic ’60’s tunes like Jimi Hendricks to accompany Mitchell-Smith’s ‘Nam fixation. No surprise that ‘Born To Be Wild’ by Steppenwolf gets played (it’s got to be one of the most overused songs that pop up in movies. I think the music gave the film problems to get a dvd release. The music rights were an expensive issue to resolve. Also, Eddie Van Halen did the film score and his participation to the film has become an intriguing piece of musical history for Van Halen fans ever since.

There are some interesting relics of the time one might enjoy spotting as they pop up in the movie. A young Dean Devlin (future writer of Independence Day and Stargate) shows up as a liquor store clerk. Kevin Peter Hall (Predator) is a towering bouncer. Ben Stein plays an army surplus store owner. Sherilyn Fenn makes a brief appearance. And the famed buxom Kitten Natividad is a stripper, where she no surprise shows off her famous 44EEE breasts.

The Wild Life is certainly not a ‘Must See’. It’s a harmless teen sex comedy. There’s nothing outstanding in it and nothing awful – it’s simply a very middle of the road entry in the genre. It had all the elements to be a really fun movie – a good cast, Crowe’s pen, but somehow they forgot to add in the necessary ingredients to make this cake rise as Crowe did with Fast Times. The Wild Life just settles in and doesn’t end up being that special a desert.

A trailer promo I made for The Wild Life 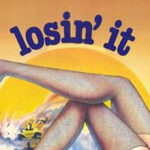