I wish there was a way to find out at any given moment when there was someone out there thinking about me.

It would be sort of the same premise behind these “who’s online now” icons we have – at any time you can see which of your friends are online. I would like to further this concept and be able to know who on this planet has their mind tuned to me!

Call it ego, call it cocky, call it self-important, call it whatever you want, but I would like to know these things. It would be beneficial. Like if I’m having a bad day and feel like the world is against me – it would be nice to know that someone at that very second has me on their mind.

And not only would I get to know that ‘So and So’ has me on the brain, but I would get to know the exact details of it! How great would that be? I could know instantly if they’re having good thoughts, bad thoughts or just reminiscing about some random experience that happened between us.

And this wouldn’t have to be limited to people I know. We can include people who I just had a passing experience with. There are plenty of encounters I’ve had that have been one-time only incidents between me and someone else who I’ve never seen again. People who have no idea who I was, but remember something about me. For an instant they recall our shared little incident!

– Like the waitress I accidentally tripped at Red Lobster and she ended up dumping a huge tray of food on that bald guy.

– Or some of those nutty acting students who after I got shanghaied into taking that acting class I managed to impress them with my Charlie Brown monologue.

– What about that guy who I was standing on line behind and he dropped that twenty dollar bill. I’ll admit the thought did occur to me of snatching it up, no one would have known, but I ended up telling him he dropped it. That good deed should certainly be worth a thought every now and then!

This could also help with refreshing my memory. Maybe I would see someone is thinking about me and I have no idea who they are. “Who is this person and why did they quickly think about me???” After reading the details of this thought that’s occurring I suddenly have that flash of recall and realize “Oh yeah!!! Now I remember them! Wow! I completely forgot about that!”.

Anyway, it was just a thought. 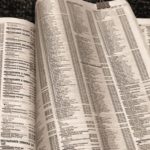