It’s a historic moment when the first female president is elected! President Leslie McCloud (Polly Bergen) is moving into the White House and is going to be plenty busy with running the country.

But wait what is her husband Thad (Fred MacMurray) expected to do now that he’s the First Gentleman? Poor Thad has to pick out what will be served at dinner, attend tea parties and christening ships while spending his nights in the lovely First Lady feminine bedroom. Let the sexist hi-jinks begin!

This is an extremely boring one-joke comedy that runs out of gas very, very quickly. It becomes such an antiquated, sexist, cornball comedy that I imagine it seemed like it was out of date when it was made!

I’ll admit for the first ten minutes I was intrigued by the setup. What adjustments would the First Gentleman have to make assuming a role that had always been a woman’s? And it’s amusing when MacMurray meets his social secretaries and sees his flowery bedroom. But after that the movie has nothing else to do.

Bergen gets a few skeptical reactions by dignitaries who are not confident that a ‘woman can handle this job’. Meanwhile, MacMurray feels castrated because he’s filling ‘the woman’s role’. Yawn. The rest of the film consists of MacMurray trying to do something with his time and that results in him entertaining a South American dictator (Eli Wallach) who is quite a rambunctious fellow. The bad press he invites annoys the President, but amuses his son.

Then MacMurray flirts with an old girlfriend and decides to work with her at her perfume company, which annoys the President. Finally MacMurray comes to his senses that he’s only being used because of his First Gentleman image to bring publicity to her company. Took him long enough. Both of these scenarios have zero laughs.

Really the funniest thing is the couples son using the secret service as his own protection when he gets into schoolyard fights. 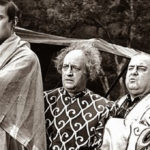