You get ahold of your trusty cellphone. Make yourself as pretty a possible. Strategically pose in a mirror – nine times out of ten you’ll be looking in a bathroom mirror. Hold up your arm. Focus and snap away.

With any luck this picture will be one that everyone will marvel at for years to come.

I guess that’s the thought process.

These cell phone-mirror pictures have been a plague that has infected the population since the novelty of camera phones came into existence. You log into Facebook and it won’t take you long to stumble onto them. They’ve become such a phenomenon that actual websites are devoted to highlight the worst and strangest of these mirror pictures – which there is no short supply of!

I’m not sure the tech Gods who developed the innovation for everyone to carry their own personal camera in their backpocket anticipated this device would be used in millions of bathroom mirrors. Somehow that just doesn’t seem like something you could ever anticipate.

Sure, it’s easy to do and I guess that’s why people love taking them. Having a Facebook or Twitter account can be a lot of work. People might start to feel compelled to check in, update, share new pictures and keep their news feeds moving along. So taking a minute to run to the bathroom to snap off a photo to share with all your friends doesn’t seem like it would be too much effort.

It’s a very individual process. You don’t need anyone’s help. Let’s face it, it’s much easier to snap one of these mirror pics than actually getting someone to take a picture of you standing in front of some scenic background. But is it really worth it?

The old expression is ‘a picture is worth a thousand words’. For me these mirror pictures have nothing to say. I don’t really care about the daily documentation of people standing in some crapper whether it be their own or even worse some public one!

I’d be more interested in the folks who happen to be in that bathroom taking a leak and they see some knucklehead making a kissy-faced pose in the mirror. What an odd thing to see while you’re trying to get to the paper towels.

Most of the time these mirror pictures block the persons face by their cell phone anyway. So what am I supposed to be looking at? The linoleum? Should I take note if the toilet paper roll needs replenishing in the background?

The best of these mirror pictures are obviously of hot sexy women showing off their bods in a state of undress. I will admit I certainly enjoy looking at these more than the photoshopped/airbrushed pictorials of models that we get in magazines nowadays.

At least we know there was no touching up done anywhere in the photo. They’re having enough trouble framing themselves, let alone to do any photo manipulations. Whether it be featuring their assets or highlighting their flaws, what we see is what we get (or would love to get).

Unfortunately, most people who are doing this ‘mirror mirror’ game aren’t that photogenic and have a heck of a lot of flaws they just captured for everyone to see. But that’s the most superficial enjoyment I get out of mirror pictures and I still think these hot women must have a screw loose somewhere to be doing this anyway.

No one ever looks natural in these mirror pictures. It’s always an awkwardly raised arm, everyone’s noggins are tilted in random angles like bobbleheads and their eyes (if you can see them) are always looking in every direction besides right at the camera lens. 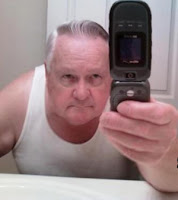 A hundred years from now is it possible that somewhere or someone will view these mirror pictures as a creative form of self-expression by their ancestors? They will gain some kind of artistic appreciation? Unborn artists and photographers will possibly find cultural merits to them? Mirror pictures will be featured in exhibitions, filling walls of museums with titles over them like ‘JPG17354628’? Future generations will view them as a significant historical record of early 21st century human beings?

Or will they just marvel at the kind of bathrooms we used to use and laugh at how ridiculous we look?