Driving around the other day I was trying to make a nearly impossible left hand turn. What made it impossible? It wasn’t the road. It was just your average street, not really heavily traveled and not an endless stream of cars whizzing by I had to avoid.

It was the truck parked on the corner that made this seemingly simple left turn a nightmare.

Unless I was using some kind of periscope I wasn’t going to be able to see around this big guy to make sure the road was clear ahead for me. So I had to do the old inching out into traffic little by little enough that I could finally see the road around this guy.

I’ve noticed this going on for awhile. Cars seem to get bigger and bigger every year. Sure there’s the rare occasion that I’ll see those little two seat numbers sporting around, but generally the roads are practically totally obscured by huge, gigantic tanks hauling down the road.

There must be some kind of study that looked into the psychology of why certain drivers feel the need to own such monster size vehicles. And I’m not at all convinced it’s because they just feel safer in them…. 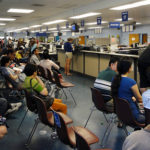